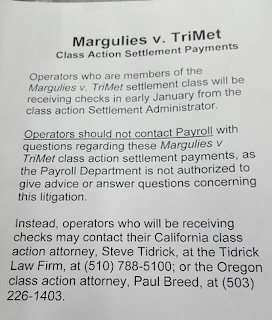 Id be lying if I said I wasn't getting a tremendous amount of satisfaction seeing my name plastered all over Trimet and on  Trimet employees pay slips.

I haven't had this much fun since the Lane Jensen days.


I often wonder what my life would have been like if Trimet had treated me like a human being worthy of some respect rather than a replaceable employee who needs to keep their mouth shut and do what "we" tell you to do.

I definitely would have continued working there as I actually liked the bus position I had  and was surprisingly an excellent bus driver even tho I was the king of distracted driving.

Many people are aware since retiring (before they fired me, I knew they were in the process of concocting a case to fire me) from Trimet I spend several hours every day, 7 days a week, following Trimet and the events at Trimet. It's a full blown hobby for me.

Trimet is a funny place to work. It's located in Blue Portland, run by Democrats and you'd think that it would be a humane place to work.

Union employees at Trimet have been under  relentless attack since Neil Mcfarlane assumed the Trimet throne and hired that hatchet man Randy Stedmen. We have numerous examples of Trimet breaking laws, defying court orders, and penalizing union employees unjustly.

They are the most inhumane of employers. While union employees struggled during the last two Trimetgeddons, where was the executive class? Probably home, safe inside their houses.

When they do come to work they have set up a "gated community" for themselves,  far removed from employees and riders.

They live in an alternate reality. All the six figure executives, part of the "meritocracy" have no idea how regular people live and work and they have no interest in finding out.

When I watch these board meetings or read these press releases I see all the same disconnect with reality. The people running Trimet just don't get it, at all.

In a funny twist to the class action settlement is the fact that employees have gotten pay stubs indicating that they have been paid.

Nobody has seen any money!

I have never heard in my life of an employee getting a pay stub indicating that they have been paid but have not actually gotten any pay!

Of course its Trimet that is issuing these pay stubs and we know how they roll.

Unethically, illegally, and without regard for their employees.

And now we have yet another example of this sort of behavior .
Posted by Al M at 2:17 PM

Amen Brother! In the 8 years I worked for TriMess, I have gone from proud to embarrassed to have been employed by such an unethical company. It's really sad to see how far down they have fallen.

Good to see those settlement checks are coming in Jan , so they say.