Tom Hortons argument in favor of splitting with the union 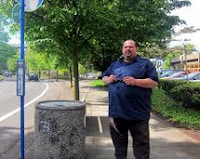 I have no dog in this show, I am basically neutral but I have been very disheartened by the never ending bickering that has been going on at ATU757 for the 20 years I have been involved with it.

I can't remember one instance where there was actual solidarity at this local.
With that said, Tom makes some excellent points.
Tom Horton is a superior writer , if only it was a simple as he puts forth.
The complications of forming a new unit would be HUGE!
He makes it sound so easy.

Vote for a new union and everything will be fine.
His entire argument is basically "our current leadership is 100% corrupt so we need to do this." What he totally leaves out of his piece is that the leadership WAS DEMOCRATICALLY ELECTED! And not once, but twice.
I know there are a lot of things at the union that are not helpful to the members.
The lack of transparency and the iron fisted rule is contemptible.
BUT, I do not believe that making a brand new union, at this time, a Time where the Republicans have control of the federal government is a good idea.
Unions are on their last gasp right now, this would only hasten the demise of our union if a Federal "right to work" rule comes into existence, which is what the Republicans want.
A shitty union is better than no union.
I have posted his piece in total but I have made notes with my comments

A UNION FOR EVERYONE

Others have expressed their opinions about the effort to organize a new, stronger union local to serve TriMet workers, and I want to, again, express my support for this move.

I have been a vocal advocate of this kind of reorganization since I ran for President and Business Representative against Ron Heintzman in 2012.

Once again, allow me to lend my voice to the many local brothers and sisters who have long since passed the point of anger and outrage with the leadership of Ron Heintzman, and the puppet regime that I have often referred to as the Hunt-Heintzman Cabal, that continues to subvert our majority rule – the very essence of labor unionism. (I'm not sure how Tom comes to the conclusion that the so called "cabal" is subverting the majority. The last time I looked the 'leaders' were elected in a democratic election.)

The brothers and sisters I have work alongside every day for more than 20 years have long passed the feelings of dismay, discouragement, and dispirited hopelessness, to the point of self-destructive apathy and indifference toward union business that would, normally, be a stronger force against unhealthy and unhappy working conditions.  Many have ultimately become resigned to the darkness of tyrannical oppression, including termination, at the hands of management henchmen because of the ineffective, weak, even absent union leadership.(That's great hyperbole but there are numerous examples of fired operators getting their jobs back. Furthermore the Trimet management is in the drivers seat here, not the union leadership)

Let me be clear.  It was the Hunt-Heintzman Cabal that brought us the No-Strike Law in 2007 without a vote of the membership. (true)  It was this same puppet regime that lost the defined benefit pensions for new hires,  and allowed unprecedented take-aways from our retiree’s health care through Binding Interest Arbitration in 2012.(Nobody "allowed" anything. That was  a decision by an appointed arbitrator.   Let me remind people here that if you look around the world for the last 10 years its been one setback after another for union workers. I can't and won't put the 2012 arbitration decision  on the union leadership.)  And, it is this same old, stale, stagnant, stinking status quo that continues to make no progress toward resolving a backlog of grievances, defending our professionalism in the eyes of the public we serve, or protecting us against increasing incidents of violent assault.(He's got good points here)

So, what is the problem?

In my considered opinion, it is the gerrymander created by Ron Heintzman.  On the face of it, one might be inclined to think there is strength in numbers.  This may have been one valid motive he had for gathering up one contract upon another, then another, and more until there are now more than 20 properties that fall within the boundaries of our union local.  In reality, this gerrymander, this twisted and not-so-local local, has, in the long run, mostly served an unfair advantage for himself (the power of incumbency), subverting the majority rule and effectiveness of TriMet’s members. (this is a pretty bodacious claim, I don't buy the conspiracy theory)

At the same time, our voices are dimmed by those brothers and sisters at their far-flung properties, who rightfully believe they are underrepresented in the top three, which always seems to be governed by TriMet’s candidates. (agreed)  If you happen to attend one of their continuance meetings, many of them feel TriMet business overwhelms their interests at their meetings.  No matter how you look at it, we feel our majority is lessened, and they feel like we are too dominant.(do they actually feel that way? How is Tom coming to this conclusion? Do the outlining properties want their own union?)

This is a serious problem that diminishes our bargaining strength in negotiations.  We are divided, not by member efforts to organize such as this, but by locations that make us unique and separate (bless us, everyone), and by unscrupulous leadership (these sort of personal attacks demean Tom's argument. He's asserting that the leaders are conspiring to do things against the members. I don't see that at all) that seeks to keep us divided, uninformed, and aloof.  Why?  Because it serves their personal and private ambitions!  Because by diminishing the control of the membership, incumbent leaders can get new cell phones, laptop computers, and a new car approved in every annual budget. (uh, ya, this happens everywhere I believe)  By thwarting the will of TriMet members, the Hunt-Heintzman Cabal pursue votes from the gerrymander to approve their lavish trips to “conventions” in Hawaii and Las Vegas.  They repay their friends with travel paid for out of our dues, and use their goons to intimidate members who disagree with them.(this is outrageous, really Tom, I love the drama from a literary point of view but this is over the top)

I am not speculating here, my friends.  I speak from experience.  This is a malicious practice, rooted in a cynical, selfish power-grab, that has deleterious consequences to the principle of democratic self-rule. (once again, they were elected in a democratic election)   The motivation for subverting the TriMet majority is not about increasing strength-in-numbers through multiple contracts, or leading you to achieve greater advantages at the bargaining table.  Instead, it is about providing the politicians with inflated revenues from additional dues, and it results in less incentive to represent the interests of TriMet workers.  Furthermore, these unscrupulous puppets (LOL)  now have greater incentive to purposefully waste our votes relative to the many, many other properties from which they can achieve their corrupt ambitions.

May I remind you of a conversation I had with Sergio Garcia, President of our local Latino Caucus.  In a candid explanation of how he and Jon Hunt always get what they want he told me, “TriMet?!!  Shit.  They don’t know nothing about what’s going on.  They’re only 40% of the votes, and we’re going to have most of them, too.  So, the rest of them, they don’t count.”(LOL, did he actually say that?)

These leaders (and I use that term loosely) need not be ashamed of their own disgraceful, and many times unlawful (DUII) (oh the DUI, here it is. Red Herring, not relevant in anything but character assassination) behaviors.  Why should they be?  Because our union is the union of second chances?  Hell no!  How many of you reading this know of another brother or sister who did not benefit from a second chance?  No.  Unfortunately for us TriMet members, it is because they are the incumbents of a gerrymander! (LOL! Tom was always one hell of a writer!)

Therefore I will continue to support any effort to spin off from this gerrymander that is Local 757.  You will just have to trust me that I love our brothers and sisters at the many other properties, many of whom are my friends.  I will support the effort to reorganize and make sure all of them continue to enjoy the strength of our support, and none of them goes unprotected or unrepresented.  I love our brothers and sisters at TriMet’s LIFT, many of you know that that is where I started my career over 25 years ago.  I want them to be a part of our new TriMet local, and I will continue to support any effort to bring paratransit services back in-house.  Most importantly, I love my many brothers and sisters who have achieved the honored rank of union retiree.  As I hope to join you there in the not-too-distant future, I will continue to give the best interest of our retirees my highest regard.

TriMet members must control our own union business, share proportionally in our combined assets, and elect transparent and accountable leadership,(this I certainly support) accountable to no one else but us TriMet workers.

Please join me in supporting our fellow union members.  Two locals will be stronger than one.  Yet, making a new local that makes TriMet workers and retirees our top priority will make us stronger.  Stronger in the manager’s office, stronger at the bargaining table, stronger in the board room, and stronger for the sake of our own LOCAL community. (if only it were that simple)

Unfortunately, there is very little argument made in relation to staying united. This effort is a reflection of how people say. You may wish it away, you may "Say" it's wrong but how they feel is very real and important. There are many arguments put forth for why people feel the way they do and the response is Avoidance: this is done with the use of slogans like "Stronger together" or "Solidarity" or "Now is not the time" These slogans are not an argument, they are just statements. The other counter is the "Dismissive" you shouldn't feel that way because "Elections" or "Or Multiple elections" and finally "histortorical anecdotes" What has the union done back in the day or what all Union claimed to have achieved. None of these responses adress the issue drivers are speaking out against. They are at best just ways to silence others without having to go to all that tedious effort of convincing anyone of anything. The employees that are speaking out deserve more than just dismissals.

Al,
Again you have the incorrect information. This is not about getting a new Union!!! THIS IS ABOUT FORMING A ADDITIONAL LOCAL ONLY. Do you not think we all deserve better representation. Well there is a lot of members that are just tired of the way OUR union is being ran. Yes I said OUR Union. We are the ones that are to control what goes on but yet the top 4 people don't have respect for us to listen. Do we just get dismissed of course we do!!! Members have been waiting 4 and 5 years to get a date for arbitration. That is just unreal and unacceptable. This local is just to spread out to give members the proper representation that they have paid union dues for all these years.