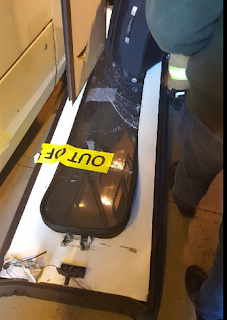 I was in the front car during this. Your pics are way better because you actually got to walk past it... lol

This door was "Out of Service" and was closed/taped shut. After leaving Beaverton TC to Sunset TC, while traveling along 217, pressure sucked them about halfway open. It was a little breezy but not too bad. As we pulled into Sunset TC and started going around the bend, the door clipped the box, shearing the door off its top hinge. The box then dragged along the first car and partway along the 2nd car as we came to a stop. The door was still attached by the bottom hinge and dragged along as we came to a brief stop.

Apparently the box was some greaser tool used to lube up the tracks so the wheels of the train don't squeal going around the bend.

In the front car, I didn't see any button to contact the driver about the door. The only alternative was to walk up to the driver's cabin, and disturb him while it was in motion, while standing right next to a half-open door traveling at 50mph. Figured we'd just tell him at the stop; we never got that far.

Apparently the MAX is supposed to stop on its own if a door opens during transit. It was already out of service, plus the door didn't open all the way, so that mechanism never triggered.