TIME FOR ANOTHER SOCK PUPPETS MEETING

(as far away as possible)
I know these meetings are a joke the board members are people that could not care less about the public they are supposed to be serving. They are complete tools of the executives in charge of that dysfunctional organization.  All one needs to so is WATCH these patsies sit there and tell the world that the executive raises were a GOOD thing and never even mention that they were handled in secret.

The power structure is starting to chip away however. Various bills are floating around dealing with structural changes at Trimet. Gawd knows its desperately needed.

Trimet as it is now functions as MCFARLANES PERSONAL PROPERTY to do what he wants with.

And the arrogance of these executives is profound in its obviousness. The public has had enough eventually the pressure will bring the walls tumbling down there. The executive class of Trimet ignores us as if we don't exist and get richer and richer. Trimet is the example of wealth and power creation at the expense of the citizens. Cut service, cut benefits, but the executives always come out on top.

Experience hath shewn, that even under the best forms of government those entrusted with power have, in time, and by slow operations, perverted it into tyranny.
(Thomas Jefferson) 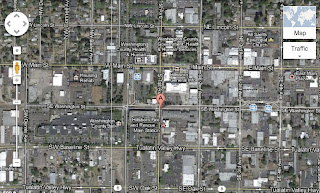