MAX RED LINE WEIGHS ON ON THE LANE JENSEN ARREST 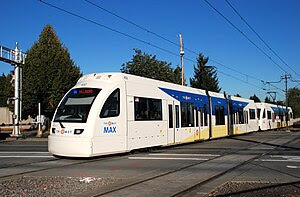 A two-car train of Siemens S70 light rail cars on the MAX system, operated by TriMet, the transit agency serving the Portland metropolitan area.
A blogger who persisted in asking questions that the development agency doesn't like has been arrested by TriMet transit cops and had his laptop and cell phone confiscated. His "crime"? Demanding answers from the agency in the days following the shooting death of a boy at a light rail platform. TriMet PR chicks refused to respond to his questions regarding transit safety, and so he programmed his SMS to text one of them repeatedly. Apparently, as far as the TriMet development agency is concerned, that's a crime meriting physical detention and confiscation of the blogger's electronics.
It's bogus on many fronts: no threats were made; a question was texted repeatedly (and automatically). Was the blogger being a jerk? Possibly, but that's not a crime. TriMet's head mouthpiece, Mary Fetsch, falls back upon a claim often deployed by Democratics who don't want to answer questions: "A blogger is not a "real" journalist."
Sorry, Mary, but that's not your call.
These folks think that they can dictate every aspect of everybody's lives, and it's time to take them down a few notches. Personally, I advocate cutting them off at the ankles. They really stepped in it this time.