This month, the Union published an open letter to the public raising concerns about TriMet’s purchase of electronic fare collection system. It questioned whether spending over $20 million (actually 30 million) on the latest techno gadgetry made sense in light of TriMet’s often stated claim that the agency is in dire financial straits.

This “dire” situation is the justification TriMet management has used to cut service, raise fares and to propose deep cuts in workers’ wages and benefits.
Yesterday, the Union learned the cost for this new fare equipment has risen from a low of $13 million in 2011 to a new high of $30 million.

Sure, some passengers might enjoy using the latest technology. However, this new technology already lies behind the raise in fares and the loss of Fareless Square, zone sensitive fares and the reduction of passengers’ ability to use transfers.
But when ridership is dropping, passenger fares are the highest on the West Coast and service is being markedly reduced, does this new fare collection system really make fiscal sense, particularly when it appears management is having a tough time determining what the final cost of the project will be?
(on blogger you can click on pictures to enlarge) 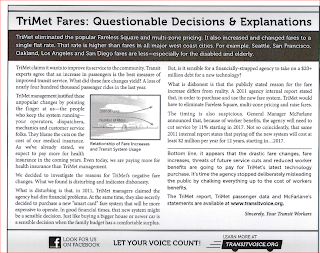 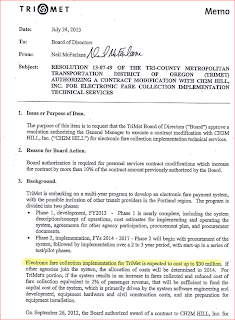 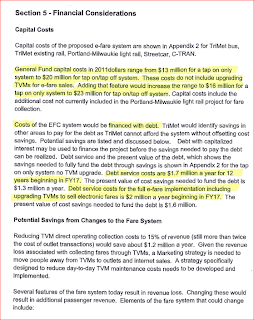 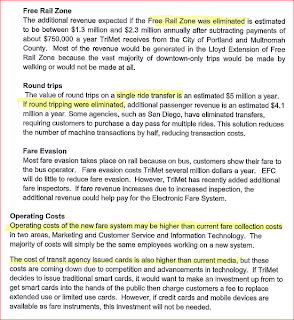 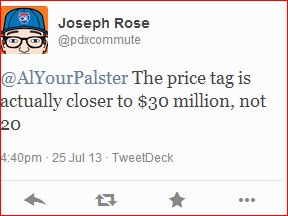 The background picture in the union's letter is of a now-retired Cherriots bus.

Also, the fare system changes mentioned should be independent on electronic fares. For example, fares could still not be checked within a free-ride area.

But regarding your last highlight, as the last sentence notes, TriMet is hoping to partially avoid the need for transit-specific cards.