Portland and its stupid streetcar 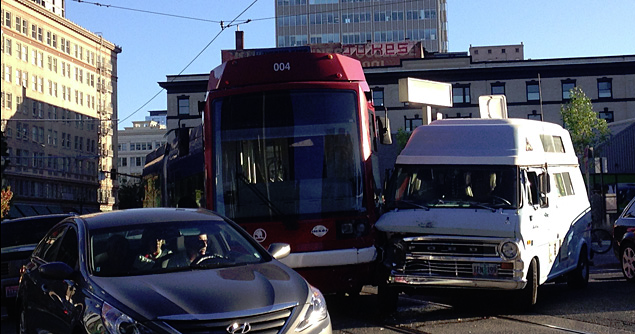 Full editorial is HERE!
The postcard-perfect image of Portland's shiny streetcars skimming across the Broadway Bridge calls to mind a ride through Disney's Tomorrowland.
Instead, however, Portlanders should think of it more like a ride down the Alice in Wonderland rabbit hole.
All of which points to a culture of complacency when it comes to oversight of the city-owned streetcar system by the Portland Bureau of Transportation. Is it a great transit option? Is it really generating the economic development that leaders tout? Who knows?
PBOT oversees the city-owned streetcar and expects to spend $3.9 million of discretionary funds on its operations this year – money that could be used for other needs, like, oh, for instance, paving roads.

But the most puzzling aspect of the response came in City Commissioner Steve Novick's letter to the auditors. Novick, who heads the transportation bureau, disagreed with a recommendation that the city pick some economic-development measures and start tracking the streetcar's impact in order to back up the argument that the streetcar is an economic development vehicle.
The city, he contends, is already doing that.
Except ... it's not.
Agreement between Portland and Trimet to operate the Streetcar is HERE!
Posted by Al M at 12:42 PM