ATU activist Chris Day writes to the international executive board

There has been controversy over termination of  Roy Jennings of C-Tran and ATU757 executive officers continuing to allow him to be a C-Tran representative. This controversy sparked the "preferring of charges" which is allowed under the ATU international constitution section 22 . The preferring of charges has not been allowed to proceed and Chris Day is challenging the decisions that have short circuited this process


I am writing you with concerns of actions that have taken place in regards to ATU Local 757 in Portland, Oregon. Two Preferring of Charges had been filed. One was filed towards ATU757 President Shirley Block and the other was filed towards ATU757 Executive Board – C-Tran Officer Roy Jennings. These charges identified local bylaws and the concerns of them being violated. A total of 14 members signed the charges towards President Shirley Block and a total of 13 members signed the charges towards Roy Jennings. These charges was in written form and was properly served to President Shirley Block, EBO Roy Jennings and ATU Local 757. These charges had been hand served along with being sent registered mail. Shortly after these charges had been served EBO Roy Jennings and ATU757 member Henry Beasley sent ATU International President Lawrence J. Hanley a letter asking about clarification on the interpretation of International Constitution and General Laws. ATU International President Responded to these letters. With that response ATU757 then stopped the Preferring of Charges process stating that International does not wish these charges to move forward. I had written ATU International President Lawrence J. Hanley to ask about confirmation of this and he responded with confirmation. This email is being sent to all ATU International GEB members in an attempt to get clarification of local member’s rights and to receive a full explanation of the actions that have taken place in regards to this matter.

Attached to this email is a file International20160119pg01.pdf. This file is a scanned copy of a letter sent to me by President Hanley addressing a letter I sent asking about the Preferring of Charges filed against ATU757 President Shirley Block and EBO Roy Jennings. In this letter President Hanley states “I have already issued a ruling on the matter of constitutional interpretation at issue in the charges. Under these unique circumstances, the local union has properly placed the charges in abeyance pending any appeal to the General Executive Board (GEB) of this office’s constitutional interpretation in my November 10 and 11, 2015, letters. Upon an appeal properly filed pursuant to CGL Section 23 …”
CGL SEC. 23 APPEALS: Any member or members feeling that they have been unfairly dealt with by the LU have the right of appeal (after the LU has given its final decision in the case or cases) to the IP, from the IP to the GEB, and from the GEB to the regular Convention of the IU. Any LU which feels that it is aggrieved by any action of a JC has a right of appeal in the same manner as any member of an LU as set forth in the first sentence of this section. An LU (or JC) shall have a right of appeal, in a filing to be submitted by the secretary of the LU (JC), from the adverse decision of the IP to the GEB and from the GEB to the regular Convention of the Union. The parties making appeals must set forth their complaints clearly in writing, giving all information and evidence bearing upon the case. They must state in the appeal whether it is to the IP, the GEB or the Convention and they must not take legal action or go into court until they have exhausted all their rights within the Union and have finally appealed to the Convention on the same. In making appeals, appellants shall file a copy of such appeals with the secretary of the LU (JC). All appeals must be forwarded through the IP. The secretary of the LU (JC), on request from the IP, shall forward to the IP a record of the trial, the minutes of the meeting at which the case was discussed and acted upon, and such other evidence and information as may be in the possession of the LU (JC) or the IP may desire, and a copy of same shall be supplied to the appellant on request. The parties making the appeal shall forward also such evidence and information as the IP may from time to time require from them. The decision of the IP or the decision of the GEB when made, will stand as the decision of the IU until reversed by the Convention and shall be placed into effect immediately upon receipt of the ruling of the IP or the
GEB, as the case may be. An appeal from an action of the LU (JC) must be made within ninety (90) days after the LU (JC) has passed upon the case. Appeals from decisions or rulings of the IP or GEB must be made within ninety (90) days from the date of the decision being appealed. If no appeal is made within the time periods set forth above, such action or decision shall be considered final and no appeal shall be entertained or considered which is made after such time periods have elapsed.

Shortly after the charges had been served EBO Roy Jennings and Brother Henry Beasley sent a letter to IP requesting clarification of the interpretation of CGL Section 14.3. There is no clear indication if the letters addressed the actual Preferring of Charges or the other bylaw Sections that had been sighted within the charges. At that time ATU757 suspended the charges until IP response letter was received. As of current none of the members that had signed any of the charges (except for myself) has received any type of notice from any ATU official as to the status of the charges. IP Hanley’s letters dated November 10 and 11, 2015 only makes reference toward CGL Section 14.3 and makes no reference toward the relationship to local bylaws or to any Preferring of Charges.

Question #1) With President Hanley’s statement “pending any appeal to the General Executive Board (GEB)” I must ask the GEB that if the charges has been put in abeyance and it was never advanced to CGL Section 22.4 then very few members are aware of these charges and the members that did sign the charges still have no idea what the status is of those charges. If our local President, EBO’s and International President just stops the action and fails to send these members any type of notice how would they know to appeal?

Question #2) Please identify when, how and to whom this final decision has been made.

Question #3) Please identify if any final decisions have ever been accompanied with instructions as to how to appeal.

Abeyance: a state of temporary disuse or suspension.
Suspension: the action of suspending someone or something or the condition of being suspended, in particular.
Suspend: temporarily prevent from continuing or being in force or effect.
Thwart: prevent (someone) from accomplishing something.
Interfere: prevent (a process or activity) from continuing or being carried out properly.

Question #4) Above are five (5) words with very similar definitions. Please identify how abeyance differs from Thwart and Interfere.

Question #5) Please identify how IP can interfere with CGL Section 22.4 by putting Preferring of Charges in abeyance when the charges had only made it past CGL Section 22.3.

Question #6) Please identify any language with in CGL that allows a single officer to overrule the laws and policies of ATU757 Local Bylaws and or ATU International Constitution and General Laws.

Currently I am working at getting in contact with all the members that have signed both Preferring of Charges to advise them of the status of the charges and the actions of our local and International. I am also working on an appeal to formally submit to the GEB. Though unlike President Shirley Block and EBO I do not have the resources of my union to pay for mailing the documents. There are many details with in these charges and I am obtaining a large number of documents. It will take me time to copy all the documents and to put together a full appeal breaking down all the details. Because of the unclear determination date I need to be made aware of the timeline I am not under to get the accomplished. Please keep in mind that I am also have to work my full time job as well so doing this is a large task.

Attached is file RoyJennings003.jpg. This file is a letter that Roy Jennings submitted to C-Tran. Members that signed both Preferring of Charges have many concerns and this is one of the examples. As you can see Roy Jennings maintains many roles. He was an employee for C-Tran, he is Washington State Transportation Commissioner for Clark County, Amalgamated Transit Union Legislative Council of Washington President and ATU757 Executive Board Officer – C-Tran. This letter is 1 of 3 letters that he submitted to C-Tran. Listed below is a list of the other Transportation Commissioners along with the dates and locations of meetings:

Here are the list of some of the concerns:
1.      With 7 commissioners why did Roy Jennings only request himself to be at his ATULC meetings as commissioner?
2.      The letter head has the ATU logo, Seal at the bottom, Organization Name, and affiliates yet it fails to have the Organizations Address. When viewing ATU757 and ATU International these both have the ATU logo, Seal at the bottom, Organization Name and address. This brings to question the authenticity of the ATULC letter head.
3.      C-Tran was permitting EBO Roy Jennings to mark off work to attend Washington State Transportation Meetings yet C-Tran was not extending the same for ATULC meetings. There is concern that this and the other letters was used for the purpose of being marked off from work.

This is just a sample of the concerns that the members are having and that is why the filed the Preferring of Charges. It was the hopes of these members that a proper investigation would take place and any issues found would be properly addressed and corrected. 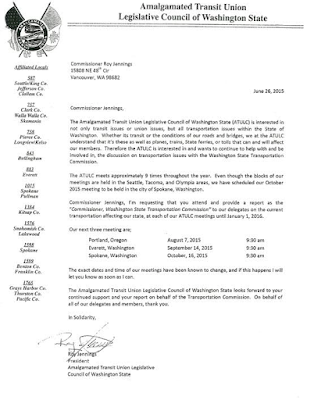 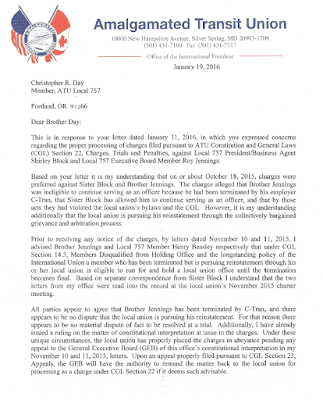