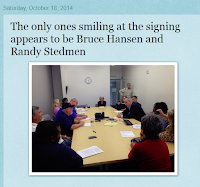 I'm getting a lot of heat again since I keep criticizing Bruce Hansen. I need to make this clear, I was a supporter of Bruce's right up till this new contract. That is when he lost my support, I had no issues with Bruce up till then.

We need to remember that Bruce was following the path of the previous President (Jonathan Hunt) in being hard-line against any further give backs.

Then one day, out of the blue, Bruce decides to forget everything that has happened and decides he will make a deal with Trimet. He fires Ron Heintzman and locks Jon Hunt out of the process.

There was no notice, there was no discussion, it was Bruce taking charge and doing what he wanted to do. And that is when he lost my support. I don't know why he decided to make that decision he hasn't shared the story with the rest of us. He says its "because we would lose everything in arbitration". I don't believe it for a second.

As a result of that decision  I lost 20% of my puny retirement. I had no idea when I retired that Trimet would be backdating cuts to include all the past employees.  And that is where I turned against Bruce.

Nobody saw it coming, not a hint of a deal until the deal was announced.
Remember when these negotiations started there was a call for real transparency.
The Portland Mercury covered the story very well: No Bloggers Need Apply? Only Mainstream Outlets Allowed to Cover TriMet Contract Talks | Blogtown, PDX | Portland Mercury

We all know that was all just talk and hoopla, neither the union or Trimet were serious about that.

I want to take a  look at the timeline of the events related to the contract:


1-The agreement was announced by Trimet on September 30:  TriMet and ATU reach tentative agreement on a new contract | TriMet News and Media Releases

2-Union members received information in the mail October 14th (no official reference found), there was no 'official' information until that time. (unofficial information was out there and on this site)
3-The union held a meeting to answer questions on October 19th(almost 3 weeks after announcement)

The Trimet board meeting is October 22nd
TriMet: TriMet Board of Directors Meetings


The ballots are counted on October  24th
(no official reference)

The way this should have worked is this:

1-Joint announcement by the parties, the mailing to the members should have been the day the agreement was announced.
2-The union informational meeting should be within 3 days of the mailing

4-The Trimet board meeting occurs.
The point I am trying to make here is that the union members were the last in the food chain.
How is that acceptable?
Posted by Al M at 10:19 AM