Back off transit tax! 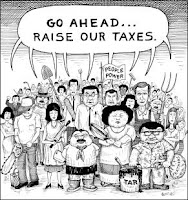 The payroll tax that supports the Lane Transit District, Tri-Met in the Portland area and four smaller transit districts around the state is the envy of all other governments in Oregon. It raises a busload of money at a low rate, it’s invisible to most people, its revenues climb briskly during normal economic times and it’s never subject to a public vote. Transit districts should think hard before inviting a backlash against their privileged position — a backlash that could easily occur if the Legislature expands the payroll tax to affect employees as well as employers.

Currently, employers and self-employed people in the Lane Transit District pay a 0.71 percent payroll tax, or $7.10 per $1,000 of wages or salaries. The rate is scheduled to rise by one-hundredth of a percent per year over the next decade, topping out at 0.8 percent. The tax increases the cost of labor, reducing the amount available to employers for wages, benefits, investments or profits, and at 0.8 percent it will amount to $80,000 a year for a company with a $10 million payroll.

The Legislature is considering the most significant expansion of the transit payroll tax since it was created in 1969: Senate Bill 1521, which would allow transit districts to impose the tax on employees as well as employers. The rate for employees would be 0.185 percent, or $1.85 per $1,000 of wages or salary.

Employees are generally unaware of the payroll tax their employers pay. It’s impossible to say what portion of the tax is money that would otherwise be paid in higher wages, and the low rate keeps it from squeezing employers’ budgets for raises and benefits too tightly. But if SB 1521 becomes law, workers would see a payroll deduction for transit on their checks every pay period.

The rate — $1.85 per $1,000, or $92 a year for a worker paid $50,000 a year — would be low. But together with the 0.71 percent paid by employers, the payroll tax for transit would begin to approach a full percentage point of all labor costs. The tax has always teetered between being safely insignificant and dangerously burdensome. The higher rate and increased visibility resulting from SB 1521 would risk tipping the payroll tax toward the latter.

The tipping point is a political one. Though they are perceived as units of local government, transit districts are creatures of state government, with boards of directors appointed by the governor and payroll tax rates approved by the Legislature. This insulates transit districts from voters, who can’t vote directors out of office or block tax increases at the polls. Transit districts’ protected status comes with a risk: Because there is no direct outlet for public discontent, resentment might build to the point at which it erupts in a revolt.

This hasn’t happened in the nearly half a century that LTD and the others have provided transit services under the current model. But if there’s anything that could spark a revolt — an initiative changing how transit districts are governed or financed, for instance — a new tax that takes a nibble from every paycheck would be it.

The payroll tax provides nearly $33 million a year to LTD, more than four times as much as comes from fares. The transit district would not be able to operate without this source of revenue. LTD and its sister districts should do all they can to protect their goose, and refrain from asking that it step up its production of golden eggs. For transit districts’ own good, SB 1521 should be given a one-way ticket to oblivion.
Posted by Al M at 9:54 AM