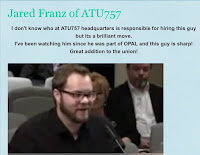 I've been getting a lot of questions about Jared and why he would be good for the union.
I've watched him since he was an opal activist. He called out the tri-Met budget shenanigans in 2012. He (and Opal) got no media coverage for this but it turned out he was 100% correct about that phony document. That was the same year that MacFarlane gave himself and his pals $1 million in raises that compounds every year.

I would dare to say that nobody has as much knowledge about the tri-Met budget then Jared. If there's anybody available that can bring to light try met bullshit it will be him. This will be vital if it's necessary to drag the sociopaths into another arbitration.

We can already see Stedman starting again using the same tactics as he did last time. Those tactics include false interpretations of rules regarding working conditions which then require an unfair labor practice action be filed by the union. Messing with front line employees also creates havoc within the union because the employees begin to wonder about the union executive officers.

Tri-met intentionally undertakes these unethical actions with the intent to destabilize the union. The more they force the union into strife and  legal proceedings the more it costs and the more energy required. Divide and conquer. And it works

So here we have an expert in Trimet budget Analysis. He already knows the kind of shenanigans that Trimet executives Play with their budget. These people are in charge of billions of dollars and they think its theirs to play with as they see fit. A puppet Board of Directors and a general public that has  been kept in the dark for decades has allowed it to become this way.

Make no mistake, and I really believe this, the people that run Trimet are sociopaths that pretty much do anything to get their way. They lie and cheat, and there is plenty of evidence and witnesses to substantiate that.  They do it all within the "law" but lying and cheating are not illegal.
Posted by Al M at 8:01 AM