The US Supreme Court seems to be poised to make the entire country a so called "right to work" country. From what I have been reading, in both mainstream and counter culture media the smart money is betting on the court to end compulsory dues.

I consider myself pro union 100%. I know that without unions the working men and woman of this country will be completely helpless to the will of the employer. There will always be someone who will do what is considered "unskilled" for less than you do. 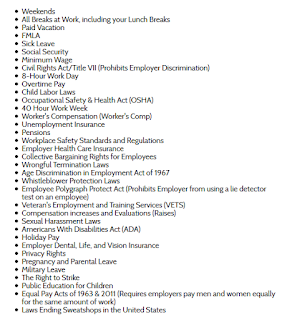 With that said, I have to say that I am right in the middle of the fence regarding this Supreme Court decision. From where I sit I have seen unions become large unaccountable bureaucracies. In the case of ATU757, the union I am most familiar with, I have to say that the amount of secrecy that our union employs rivals TRIMET itself. These unions that have a guaranteed funding mechanism have very little reason to fight for its members. The people that occupy the executive offices of said unions are all making six figure salaries. These people have become comfortable in their nice offices, going to meetings, acting like executives from the executive class, taking trips on our dime around the country and the world. If they win a good contract these executives get paid and if they lose a contract they get paid. So what incentive is there for 'our' unions to do right by us? None that I can see.

The most powerful period in American history in the union labor movement was the 1930's and 40's. Long before membership became 'compulsory'.  In 1977 Abood v. Detroit Board of Ed union membership became required in the public sector. It appears that unions started losing their power about that time to where we are today. I can't think of any major gains by any unions for over a decade actually.

So where does this leave us. Sometimes its a good thing to destroy existing institutional structures because then there is room for new 'responsive' structures to appear.

The supreme court ruling against the current public sector unions may be just the thing that is needed to get the union movement once again responsive to its members.

I won't cry too many tears if the decision goes against the unions.
(And yes, I would continue to pay my dues which I do now voluntarily)

This is not a foregone conclusion. There are a lot of reasons why the public executive class would actually want the unions to stay put. If you notice the union and the company play the blame game very effectively . The ruling class need a structure there to blame when things go wrong

because of my dedication to the principle that force is immoral. I can be pro-union but only so far. I can't believe in employees being forced to be a member, Can't believe in only one union per house, I'm still pro-union but not current American Union structure. In Germany you have have many Unions in a company,, they compete to deliver services to employees who are free to change unions.

That's why America becomes great country on terms on hiring a skilled worker that part of the union. I am a pro-union and that's what I believing great for the company.

I guess there are advantage when you become part of the union, it's mandatory. There is a high standard of quality of service when an employee is part of the union. We should see the other good side of it, there maybe some or few that is not favorable with both parties but bottom line it is all about the quality of the service that we are capable of.