Shirley Block says: There were no provisions in the parties 2009-2012 arbitrator awarded collective bargaining agreement that allowed for changes to the operator run bid process.  The recent ATU 757 TriMet membership and TriMet Board of Directors ratified collective bargaining agreement, 2012-2016, did not contain any changes to the provisions that govern how work assignments or runs are structured and bid by seniority.


Complainant alleges that Respondent has committed an unfair labor practice under ORS 243.672(2) (g ), of the Public Employee Collective Bargaining Act. The following is a clear and concise statement of the facts involved in each alleged violation, followed by a specific reference to the section and subsection of the law allegedly violated. (For each claim, specific dates, names, places, and actions. Attach copies of main supporting documents referred to in the statement of claims.)

I certify that the statements in this complaint are true to the best of my knowledge and information.

Complainant makes its complaint based on the following concise statement of facts:
1.         ATU is a “labor organization” as defined in ORS 243.650(20).  ATU is the exclusive Representative of certain employees employed by TriMet.
2.         TriMet and ATU are parties to a collective bargaining agreement effective December 1, 2012, through November 30, 2016.
The Collective Bargaining Agreement between the Tri-County Metropolitan Transportation District of Oregon (TriMet) and Amalgamated Transit Union Local 757 (ATU 757) covers the wages and working conditions of unionized employees.  The parties have had continuous collective bargaining agreements for more than forty years.  Collective bargaining agreements between the parties must be ratified and approved by a majority of the bargaining unit members and the TriMet Board of Directors before becoming effective.

This ‘block run” system implemented by ATU 757 President Hansen violates operator seniority that pursuant to the collective bargaining agreement, allows operators to choose run times and days off by seniority.  As a result, this change has caused operators to loose desired runs, days off, and economic losses to reduction in run (hours) pay, report to work (garage) locations resulting in longer commute times and for employees with child/elder care and school issues; location and schedule changes resulting in additional costs.

Complainant therefore asks that ERB:
A.        Order ATU to cease and desist from violating terms of the ATU/TriMet Collective Bargaining Agreement in regard to work assignments and how they are bid;
B.        Order ATU to restore work assignments bid by seniority as provided for in the ATU/Collective Bargaining Agreement and make all members whole;
C.        Direct ATU to inform its members of its unlawful action by sending letters to its members And posting notices on its bulletin boards and the electronic and social media tools that it regularly uses to deliver communications electronically, including its website; and;
D.        Direct ATU to pay Complainant’s reasonable representation costs under OAR 115-035-0055.
DATED this ____day of March, 2015. 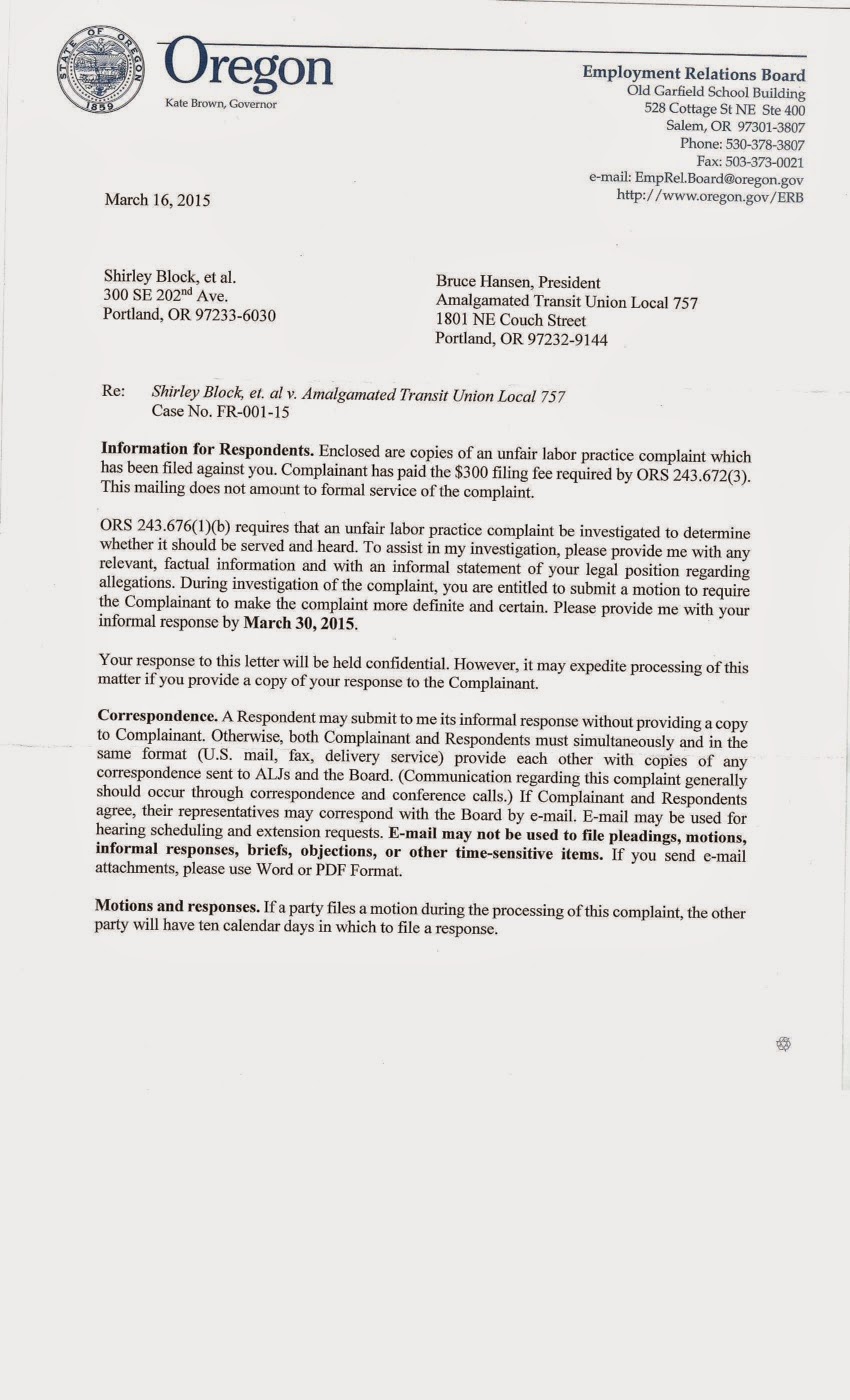 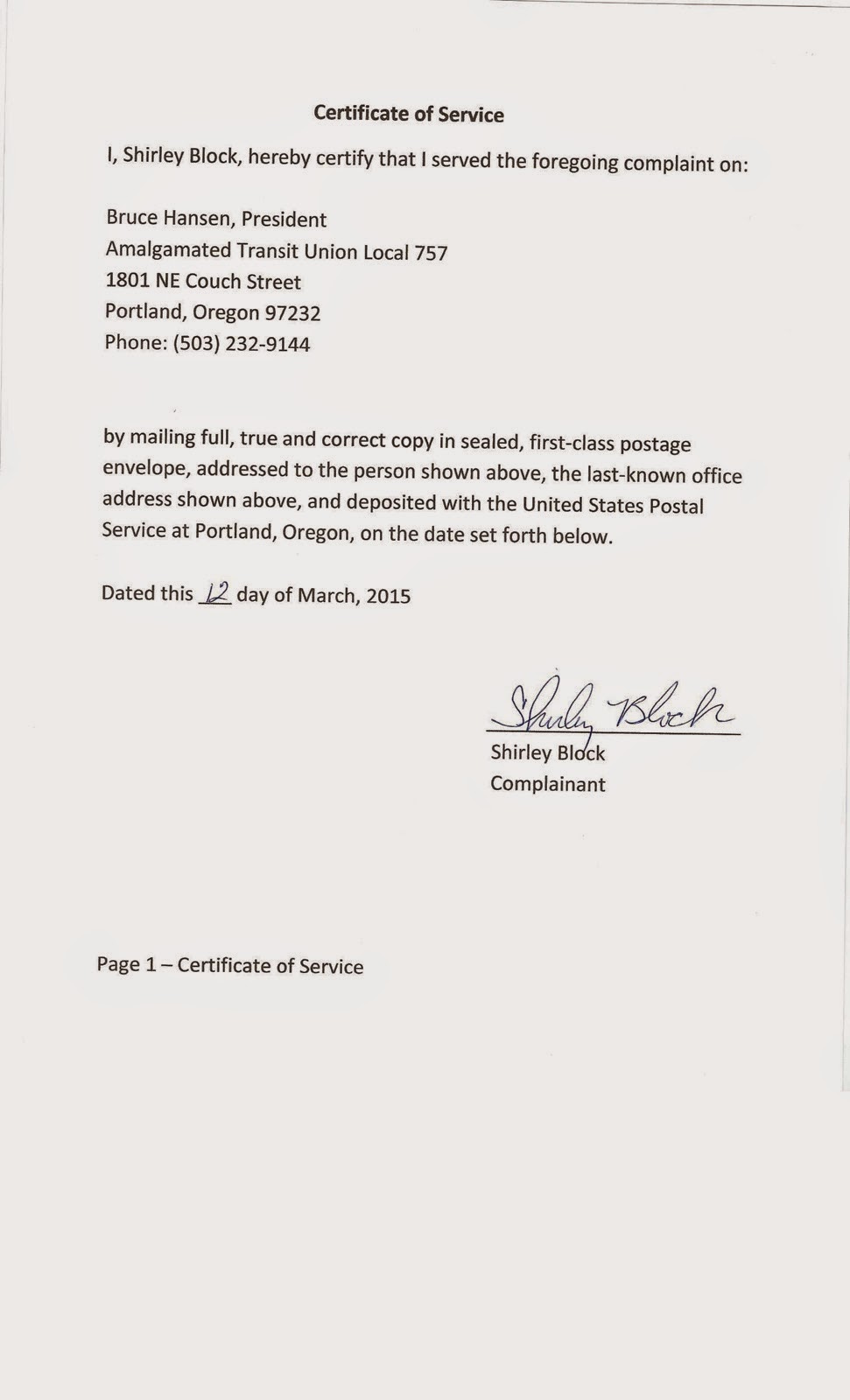 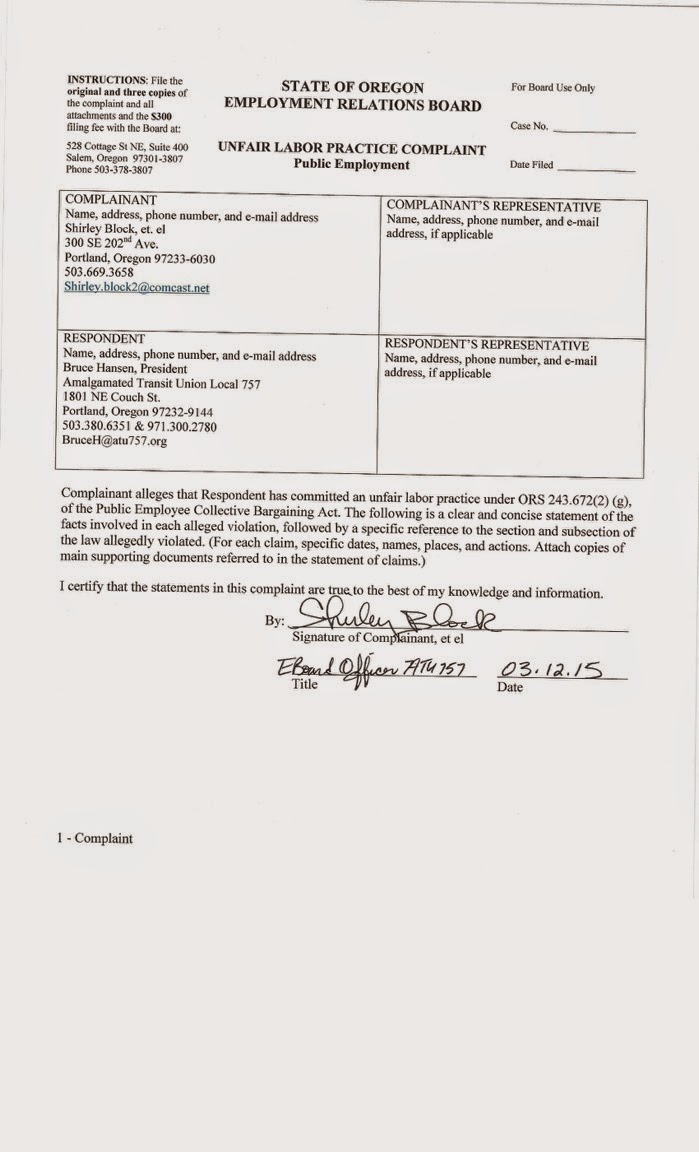 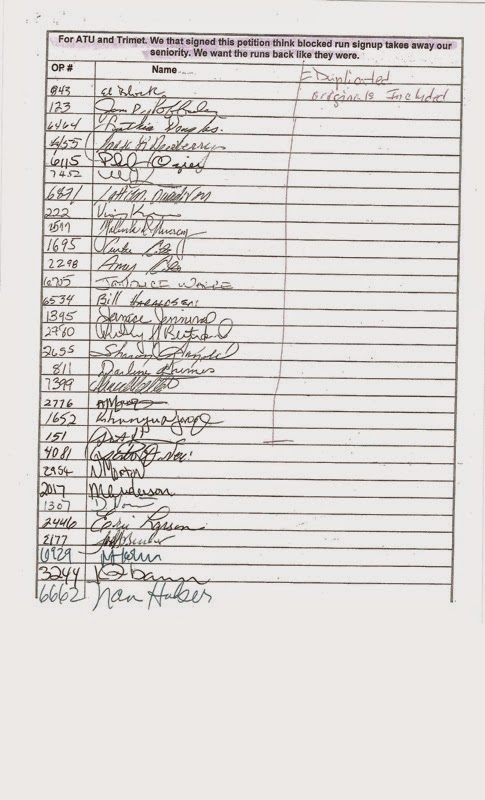 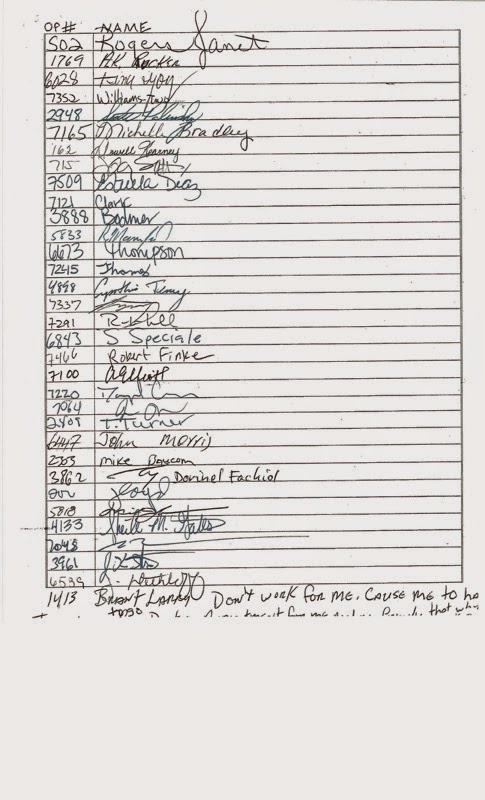 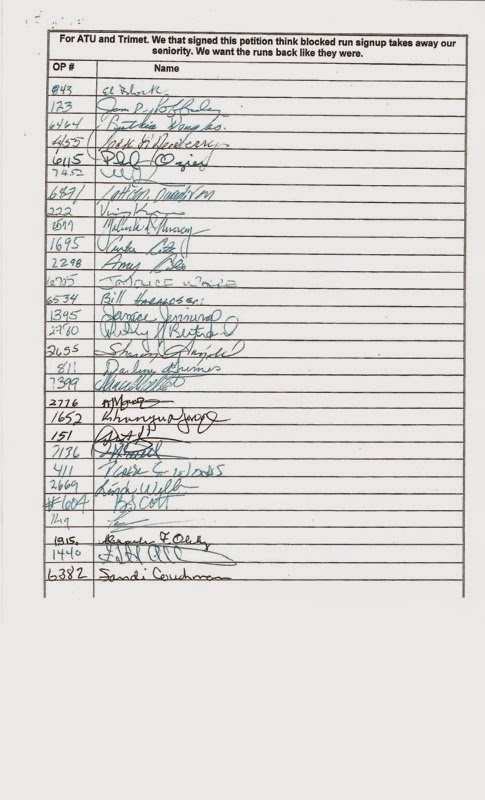 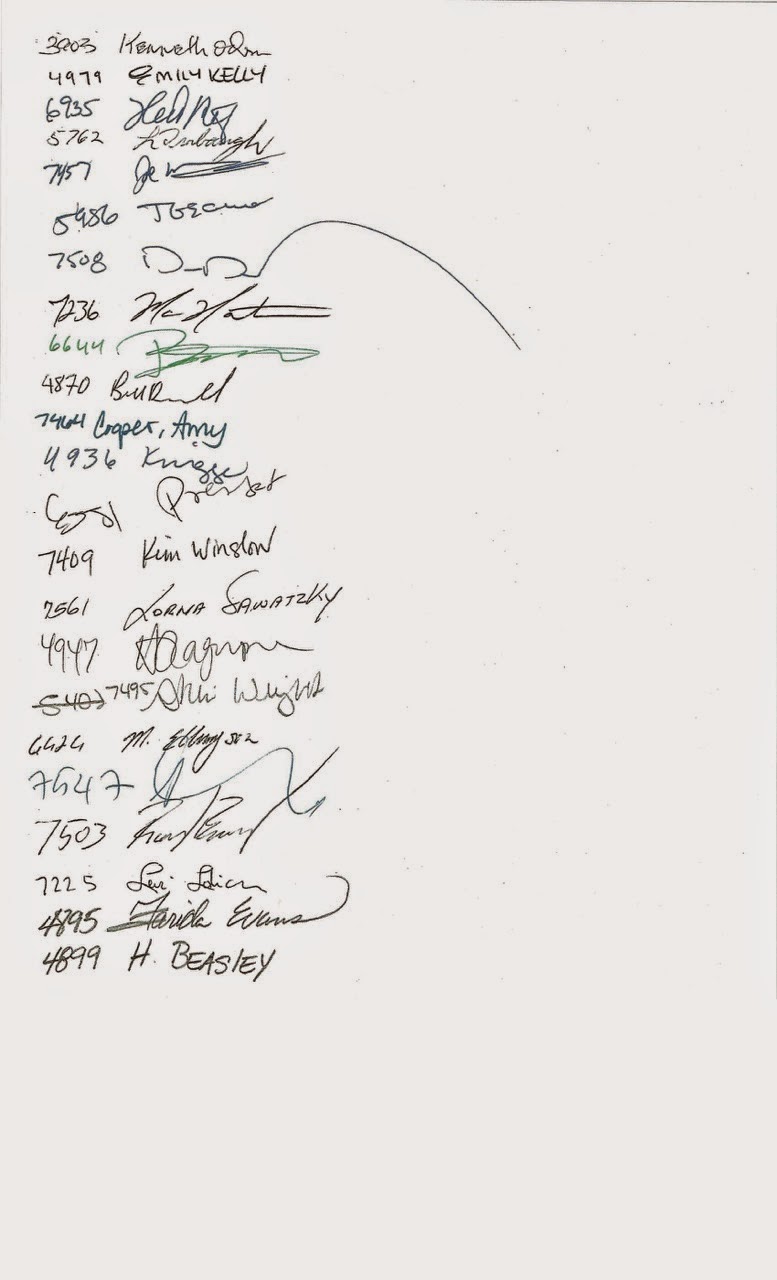 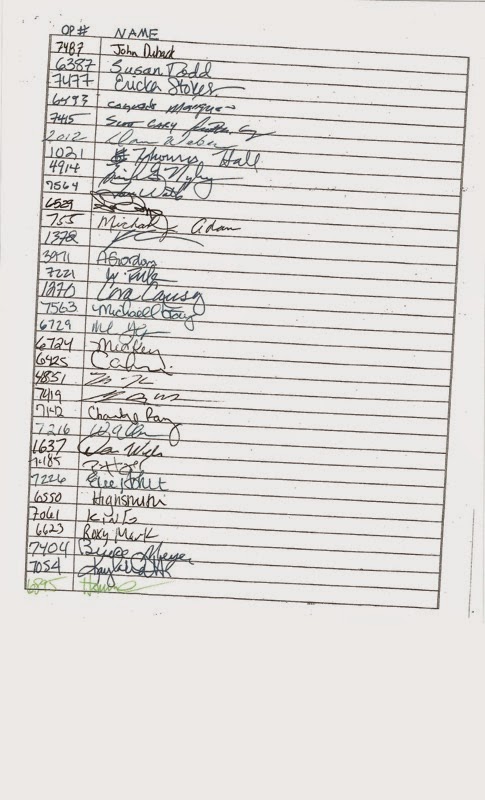 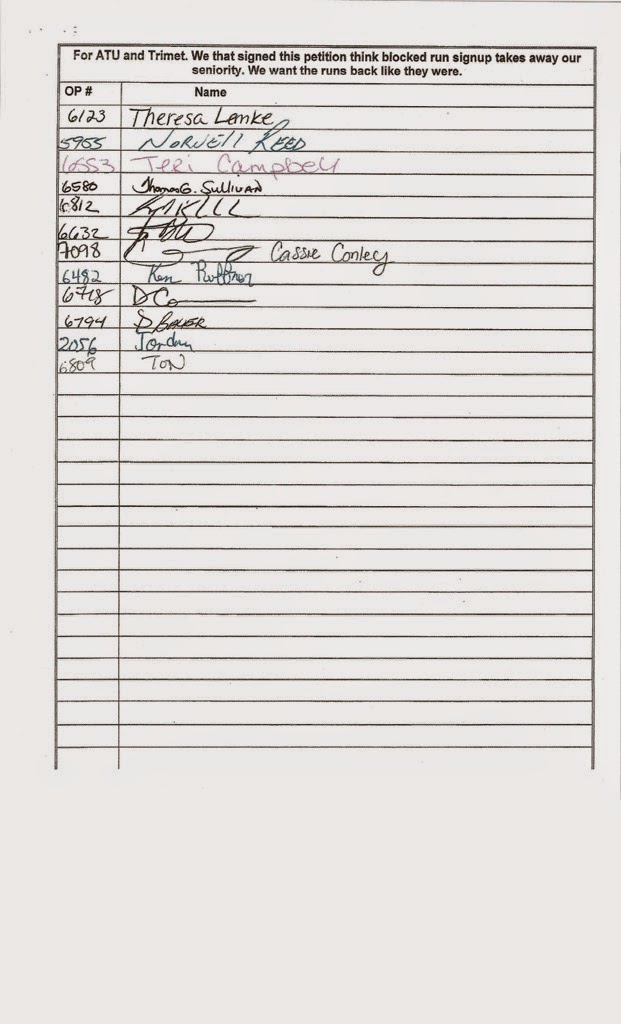 I saw this flair up last night while I was on my layovers. It's sensationalism was only tempered by a few hours of critical thinking.

Shirley is a member of the Hunt/Heintzman cabal, openly decrying the administration of Bruce Hansen on numerous occasions over the past 3 years. Breaking the secrecy of executive session, her recent attempt to scuttle the ratification of TriMet's contract nearly cost the Local dearly by risking a ULP had we failed to ratify. Setting the poorest example of unity and solidarity for members, she has routinely stood up in charter meetings to denounce the internationally sanctioned actions of a duly elected leader.

Her husband, Ebb, has recently retired, and she admits that she was planning on retiring in the next few months...that is until she suddenly found the inspiration to run for President. Now, she would have us believe that she is committed to spending the next 3, 6, or 9 years leading the union instead. By my way of thinking, her motivations for running are rooted in a cynical attempt to use the Local's plurality system of elections to give the Hunt/Heintzman cabal an advantage by splitting and spoiling the votes.

With this in mind, one can logically speculate that her lawsuit against Bruce, 3 months before Local union elections, is once again being dictated by her overlords. The details of her complaint will not be successful in light of the fact that a long history of past practices, side letters, and extra-contractual agreements, such as the MOU about the Block Packaging Pilot Program, has firmly established precedence for this case. I'm no labor lawyer, but I'm pretty sure this ULP will get thrown out as having no merit whatsoever.

Whether this happens before the election or not, this is plainly a deception being perpetrated by the Hunt/Heintzman goon squad. That's what I think, anyway.

Tom, did you not notice all the signatures on the petition supporting the ULP?

Are they all part of the "Heintzman/Hunt cabal"?

Careful now, I did notice all the signatures on a petition objecting to the block packaging methodology. Not the same thing as supporting the ULP, and in fact none were gathered with foreknowledge of filing a ULP against Local's President. The two were at cross purposes until she tacked them together.

Like you I am not a labor law expert.

However, if I was affected negatively by the 'block packages' I would use any method available to have it thrown out.

I guess we'll find out.

Yeah, but the court frowns on "any means necessary" types of defense.

Deceptively petitioning for signatures in objection to a joint labor/management agreement without informing the signatories that their signature was being attached to a ULP to be filed with the DOL might get her into a lot of hot water. Very poor judgement for a person seeking high office.

Furthermore, the agreement achieved by the MOU on Packaging is covering what are widely regarded as mandatory subjects of bargaining. Whether they should be conducted at the time of contract ratification or may be agreed upon in the interim is the question, and that, I'm sure, has been established by past practices.

One further thought, I regret not voting for Ron Heinztman. Those guys may be a 'machine' but they knew how to fight for union employees

HRS im tired of secrecy It needs to stop

Al, you must be insane. Voting for the Hunt/Heintzman cabal over and over again, expecting different results, is the very definition of insanity according to Albert Einstein.

Don't forget that group brought us contractual losses every time, not least of which include the loss of our right to strike, the loss of our full coverage benefits, the loss of our sunset-style CSI's and SIP's, and the loss of your own pension security causing you to now have to pay for your benefits out of your fixed income.

Personally, I would have given up anything else to save our retiree's pension security. Anything but that!

If I have a seat at the table, regaining retiree pension security will be my top priority. Making TriMet's Board of Directors accountable to the voters will be right behind that.

That's exactly what I thought at the time Tom.

One thing I know now is that Ron Heintzman and Jon Hunt both opposed this deal the Bruce made with Trimet.

At least they were willing to fight. Bruce just caved.

Given these facts I would rather have them representing me

Not sure if you read my analysis of current events:
Trimet/ATU progress report

I do believe that Jon Hunt got snookered by a very sophisticated Trimet sociopathalogical culture when they agreed to give away the right to strike. They did it with the best of intentions I am convinced of that.

And in the first give back that was the arbitrators decision, the union didn't just sell us out.

But Jon Hunt was out there fighting, Bruce didn't.

These are just facts Tom.

I don't like Jon, he's a ruthless authoritarian union boss.

But I tell you straight up, I miss the fuck out of Jon Hunt right now.

And that's no lie

Why are we on pers? Since we are not pers!!!why are we NOT in control of the pension?

I read your..."our"...your progress report, and it too is biased, cherry-picked for supposed facts, and I question whether you authored it yourself. Or else, cite your contributing authors since you say it was "our" assessment. Whose assessment?

I'm not here to defend Bruce, he has made dreadful mistakes to which he will have to answer by himself.

I am here to give you my assessment of this latest battle between so-called leaders. I offer you an opinion based on my 25 years of experience, higher education, and impassioned observations of political strategy in this field.

As long as the members keep sending boys to play checkers with master chess players nothing will change, unity and solidarity will fail us, and members will continue to lose ground. We need to wise up, get smart, and forward leaders with similar backgrounds as the people who sit across the negotiating table if we're ever going to stand a chance of tipping the balance in our favor.

The kinds of leaders I'm talking about are NOT alien to our ranks. We have plenty of smart, well educated, and experienced members in our Local, who come from a wide variety of backgrounds. Why don't you take a chance on doing something different for a change, break the patterns, and reject the status quo? Maybe we'll begin to realize there are benefits in different leadership skills.

Okay, I'm a idealist, a dreamer, a demagogue. Perhaps I think this contest for leadership should be about more than high school popularity, playground fist-fights, who supports the right football team, and who makes the better BBQ. But, that's just me.

I wrote the essay in it's entirety

The folks who brought you binding arbitration,now have brought the Atu a u.l.p.its amazing how ms B has allowed them to manipulate her.

Tom, you have been around long enough to understand that the powers at be currently maintains a strong foot hold in the ranks. Members who attempt to break that hold tends to get knocked down rather quickly. We have witnessed many events when a member would attempt to step forward for the membership and then get put right back down. As Al says many times that a machine has been made and it is very hard to fight that machine. Now Bruce did manage to break some of that foot hold and to that I give him credit. This was his chance to shine and currently it is looking like the machine is getting another foot hold in the ranks. One person can make a difference yet that one person can only hang in there alone for so long. We do have good members around that can make a difference the question stands before us is will these members step up and can they maintain the support of our members?

I keep my faith in good people, especially my super 68 supporters. I don't do what I do to gain popularity. If I did I'd have given up some time ago. I rage against the machine because because many won't, are intimidated by them, and it's the right thing to do. I hope I have many good years left, and I realize I have a duty to do whatever I can do to make life-work better.