Fun being a Trimet bus driver 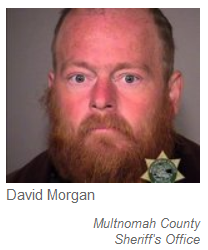 A 38-year-old man was arrested last week after allegedly attacking and spitting on a TriMet bus driver and repeatedly calling him a racial epithet.
The driver told David W. Morgan that he couldn't board his bus while it was stopped at East Burnside Street and 12th Avenue last Thursday because Morgan had tried to spit on him while he was driving two weeks before, a probable cause affidavit said.
Morgan then began calling the driver racial slurs, got on the bus, spit on the driver and hit him three times in the face, the affidavit said.
The driver soon closed the bus door, locking Morgan outside. Morgan then broke off a bus windshield wiper, according to the affidavit.
Morgan admitted to a Portland police officer that he broke the windshield wiper, but claimed he did not remember spitting on the driver, the affidavit said. When he was asked if he wanted to apologize, Morgan again called the driver a derogatory term.
Morgan was booked into the Multnomah County Detention Center on suspicion of first-degree criminal mischief, interfering with public transportation, harassment and second-degree intimidation.
-- Everton Bailey Jr.
ebailey@oregonian.com
503-221-8343; @EvertonBailey
Portland man accused of hitting, spitting, yelling racial slur at TriMet bus driver | OregonLive.com
Posted by Al M at 6:03 PM