We can all breath a little easier now

For example lets look at Jon Hunt. The big issue that was thrown against Jon is that he is a 'drunk'. There is absolutely no evidence to support that contention. Yes he got a DUI, big freaking deal. But Jon Hunt was out there on the front lines leading marches against the Trimet tyrants. He had the guts to go up against the chairman of the Trimet board of directors.
Is Jon Hunt a dick sometimes? You better believe it!
But the evidence clearly shows that Jon Hunt is a dedicated fighter for union members.


I hold no loyalties to this group or that group. My only loyalty is to myself and what I think is the best for myself.

After three years of Bruce Hansen and the way Bruce handled that last contract I wanted the old regime back.
They may have been somewhat tyrannical but those people are fighters and we union people need people willing to fight for us!

I was genuinely frightened of Bruce Hansen being the sole  authority who is responsible for signing agreements with the unethical  Randy Stedmen as outlined in this contract clause outlined in black.

I am much happier at the thought that it will be Shirley Block sitting across that table from Stedmen. 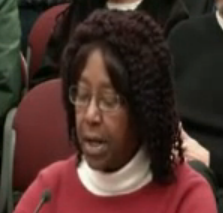 Bruce and Randy all they do is play patty cake patty cake bakers man. Shirley will say bake your own fucking cake Randy kiss my ass. Bruce nice guy really nice guy but Shirley is a PIT BULL.

Agreed. I've been watching Shirley for years now and can say that she is not a person to be pushed around or conned.

She knows the deal.

She deserves this job, she paid the dues.

The upcoming negotiations will go much different than the time we wasted last negotiation sessions. It will take years of negotiations to get back what we lost but at least it will be a start. Thank you Shirley for stepping up for ATU members! She is a PIT BULL.