What TriMet could do

PROBLEM:
TriMet bus operators get new work assignments every 3 months, which can include doing one or more routes that they've never done before.  In addition, there are some operators who do not have a fixed assignment and instead do different work each week or day to fill in for others as needed.

Given the geographical size of the system, and the number of operators, routes and route variations, it would be costly to train operators beforehand on every route they may do.  Operators only have a simplified printed route description and map to go by, and may not have enough familiarity with the area they are to go through to apply those directions.

As a result, some are unsure of where to go, which can be very stressful and embarrassing when there are lots of riders who expect the operator to know the route.  And when an operator must divert focus to figuring out where to go, they can miss intending passengers and even get in a crash.  It can also cause missed or wrong turns, which results in delays, missed stops and possibly the bus getting stuck.  A crashed or stuck bus can be expensive to deal with, requiring the time and expense of sending a supervisor and maybe a mechanic, service to be replaced or lost and if needed the bus and other party be repaired.  All of this can lower riders' confidence in the system and discourage them from riding. 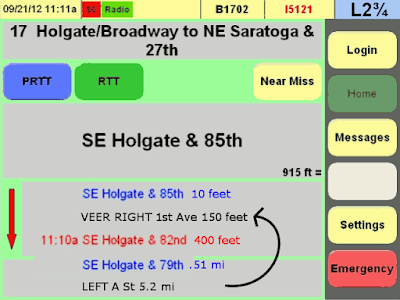 TriMet has implemented a brand new dispatch system, including a screen in every bus that, among other things, shows the operator a list of upcoming stops.  One of the features listed was that these screens were "map capable", however maps have so far not been added for operators.  There is a rumor that TriMet has decided against implementing them due to high licensing and/or other costs.

Instead of maps, it seems that TriMet could simply include upcoming turns and the distance to them in the list of next stops.  This would be much easier to do and better in that the complexity of a map can be distracting, and I have also heard operators mention the idea.  It would be best if the next turn always appeared at the bottom (replacing the end stop which isn't very useful) then floated up when it is next in line.

It would also be a good opportunity to see about other changes to the screen layout, such as adding distance to the upcoming stops and removing the times from those that aren't time points.

They should have GPS instructions included in every bus. You just enter your line number, and destination, and it takes care of everything. I like mine and use it any time I don't know where I'm going.