Seen Thursday at 5:13 PM eastbound just across the Burnside Bridge 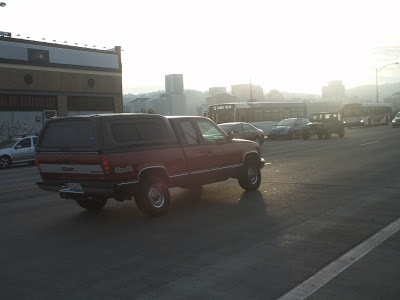 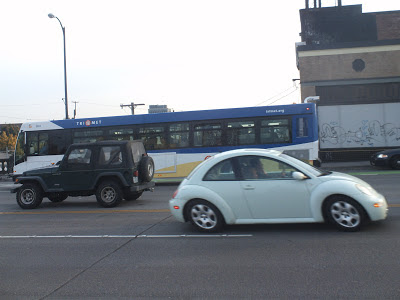 That ONE 3000 made it onto the 12 (and didn't continue to Sherwood on the 94) is about as exciting as saying that ONE MAX train is a Type 4 car, and the rest are un-rebuilt, non-air conditioned Type 1 cars.

Which, of course, all of the Type 1s have air conditioning, and many of them have been rebuilt.

My honest question is, Erik, how much would you complain if that were the case; you had it good but others did not? Cause I live in the east side and I've been getting some of these benefits, but it still doesn't stop me from demand better for everyone else. You, however, rarely ever make a complaint for anything that is not Tigard based.

I think such ignorance requires a public, written apology.

Oh boy.....I said I was sorry Cameron, I'm doing the apologizing here...
BLOG AUTHORS ARE NOT SUPPOSED TO BE ARGUING AMONGST THEMSELVES...

Cameron, you clearly don't - or choose not to - understand my argument.

While I use the situation in Tigard as an example, the FACT is that TriMet has no business operating buses older than 15 years old; and the buses 12-15 years old should be "reserve" buses not used for regular service.

I didn't - and have NEVER said - that only Tigard routes should have good buses; leaving the shit buses to everyone else. Never once have I said that - and once again you continue to insinuate that I have made such opinions. I have routinely, and repeatedly, used the phrase "From Forest Grove to Troutdale" to describe that ALL of TriMet's district deserves the identical quality of service. Not just Portland. Not just Tigard. Not just Gresham. ALL of TriMet.

Unfortunately, I am just not familiar with the specifics of East County TriMet service to give specific examples. I don't live there, and I don't use TriMet out there. So I can't speak in specific terms, like I can in Tigard. It does not - and has never - meant that I don't support service upgrades out there. Having a bus fleet that is 100% newer, low floor buses, would serve EVERY TriMet rider equally and fairly, because EVERY TriMet rider whether you live in Cornelius or Wood Village or Durham would have the same high quality bus.

When I have called upon TriMet to improve bus stops and bus access - I never, ever suggested that such improvements only be done in my neighborhood; rather I have called for those improvements SYSTEMWIDE - again, "From Forest Grove to Troutdale". The few million spent on just one MAX station (such as the Rockwood or Civic Drive stations) could easily improve dozens upon dozens of bus stops. Heck, the $165 million spent on WES (which does serve Tigard) could have purchased over 380 brand new buses to be used - again, "From Forest Grove to Troutdale" - systemwide, benefitting EVERY TriMet rider, and not just 900 riders in the Beaverton-Wilsonville corridor.

Of course, you leave it to your own pre-conceived opinions, much like Jason McHuff, who oppose my views simply out of personal hatred rather than the issues.

Case in point, when I expressed my disapproval of the "Youth Pass" - you made multiple insults calling me "ageist" and "discriminatory", but you conveniently ignored my real point of view - ANY TriMet funded program should benefit - once again - everyone "From Forest Grove to Troutdale". Not just one select group of residents. There is no reason that Portland Public Schools students should get a TriMet funded benefit, but students in the neighboring David Douglas or Parkrose districts get nothing. Not to mention Forest Grove or Reynolds, or Centennial, Gresham-Barlow, Oregon City, North Clackamas, or Tigard-Tualatin - or the other half dozen or so school districts that overlay TriMet. I support a program that benefits all equally - not some, to the exclusion of others.

Maybe, if you could set aside your personal prejudices, and actually read what I have to write, you would realize that I am absolutely for better transit - not just in Tigard. In fact, few, if any, of my suggestions, are solely related to Tigard or even the Southwest Corridor. And maybe you've forgotten that you, in East County, have benefitted from millions of dollars in TriMet investment thanks to MAX, including one revamped station, one brand new station, and improvements to another, just in recent years. Those benefits serve East County but have not produced benefits elsewhere. East County also benefits from having TriMet's newest buses - the 3000 series - and from reports from my TriMet Operator friends, Powell no longer has any high floor buses, meaning EVERY bus that operates in East County (unless it's a road relief or happens to operate out of Center Garage) is no older than 1998 vintage.

But, I'm sure you will ignore everything, and return to your preconceived notion of what you want to hear, because you are always right.

And maybe let's review some of my past opinions:

1. Charging TriMet riders more for riding an express bus (which would impact me and not in a good way)

2. Charging Park & Ride users to pay to park (I occassionally will park at the Barbur TC and I would have to pay for that)

3. Improving 4, 9 and 72 service with high capacity articulated hybrid-electric buses or even BRT service (along with the 33, 57, and 12) (The 12 is included in a list of other routes that serve other parts of the region)

4. Upgrading eastside Portland routes between downtown, Milwaukie and I-205 with trolleybuses (No benefit at all to Tigard)

5. Reimplementing express bus service from Gresham and Hillsboro (Tigard already has an express route and thus would not need this)

6. Implementing remote night layover yards, so that buses can start closer to their originating point - one such facility would HAVE to be in Gresham, along with Oregon City and Hillsboro, and also Tigard.

Funny...how...none of those are specific to Tigard, and Tigard is only mentioned as receiving a benefit ALONG with other regions of the area.

You'll also notice I was a HUGE opponent to the wasteful WES line which seems to benefit Tigard, to the expense of other areas. I would have preferred a much more cost-effective BRT line, which would provide service similar to the MAX line (which, by the way, East County has Blue, Red and Green Line service...)

So...how else can I prove you are wrong, wrong, WRONG with your assertion that my views only benefit me and not others?

And you demand a public apology from me? For what? Having to prove you wrong? Having to back up my arguments, again (only to probably have you complain that I repeat my arguments)? That I have to put up with the insults you hurled at me and then try to pass it off as a symptom of your disability so that I should somehow have some sympathy for being insulted and personally attacked?

ALL of TriMet's district deserves the identical quality of service.

Erik (and others), if you think Portland gets better service than the suburbs, step back and compare Portland to e.g. Tigard. And specifically BESIDES the actual TriMet-funded service and improvements.

Unfortunately, much of TriMet's district discourages people from using transit. And in those areas, the achievable ridership is lower and the rides that can be served per dollar is lower.

Bottom line: It's not like TriMet's totally at fault.

EVERY bus that operates in East County (unless it's a road relief or happens to operate out of Center Garage) is no older than 1998 vintage.

Not sure it's out of Powell, but I've seen a 1400 at Gateway doing the 22/23/24 lines. And someone actually went to a Board meeting and complained about it.

As I've told you multiple times, Portland students do not get school bus service that others get. MOREOVER, it is NOT a totally "TriMet funded benefit" as it wouldn't exist without outside funding (ideally, the state would pay for it using the same money every other district gets for buses).

And many in Portland have had attendance problems as a result of not having a way to get to school. In addition, Portland has specialty schools which results in students not attending their neighborhood school (if it's still even open).

Also, Neil has said he wants to extend it to the districts you mentioned. But due to the suburban issues I mentioned earlier, it's not so feasible.

Lastly, they ARE discussing BRT on Powell/Division (watch last week's board briefing) and, like Youth Pass, Civic Drive/Rockwood/WES are a result of outside funding.