There has been so much pro Trimet propaganda pumped out of the Trimet public relations department via mainstream media and social media its very hard for the public to see anything but how wonderful the local transit district is.

At this blog we try to cut through the bullshit and bring to light the realities of being a Trimet employee or rider. This blog covers the stuff that you won't see from Trimet public relations or their mainstream media stooges/social media bots.

Trimet bus riders suffer a variety of inhumane conditions on the transit system. We have been illustrating these failures recently.
At Trimet the needs of the employees trump the needs of the riders. You see this constantly at MAX when they 'turn a train around' which necessitates the kicking off of all the riders from the train being turned around. Tough luck for the MAX riders if they will be later than necessary, Trimet's on time statistics are more important. (Trimet's on time stats are basically a farce because of the way they turn trains around)
And we see this happening with the 'drop off only' policy of the buses which leaves riders waiting even longer than they have been waiting.
Not sure what can be done to end the suffering of the MAX riders but the bus riders suffering could be easily alleviated by keeping an adequate number of 'extra service' buses on hand.
Trimet executives worry that bus drivers will get breaks 'that are too long' and the aim of these executives is to get every inch of work out of their drivers. Drivers who are basically equated with pieces of equipment, to be used and abused as much as possible and easily replaced.
Trimet doesn't want to have to many bus drivers 'sitting around' so there are insufficient drivers for bus routes that get bogged down. It's the riders that have to take the brunt of this abuse because Trimet is to cheap to make sure adequate resources are available.
See at Trimet they can come up with $30million out of their budget to reinvent the wheel (tap card technology) but they don't have enough bus drivers to maintain a high level of service.
Trimet has always been about bells and whistles and public relations. 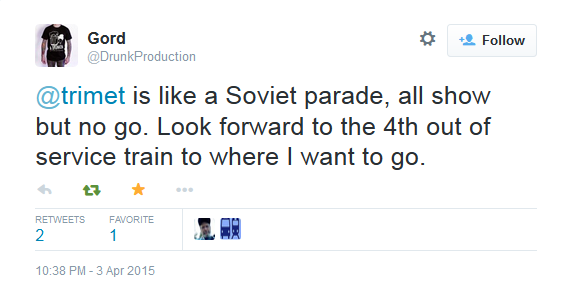 In the incident below we see an ethical bus driver concerned that one of his riders is getting screwed over and over by the 'drop off only' policies.