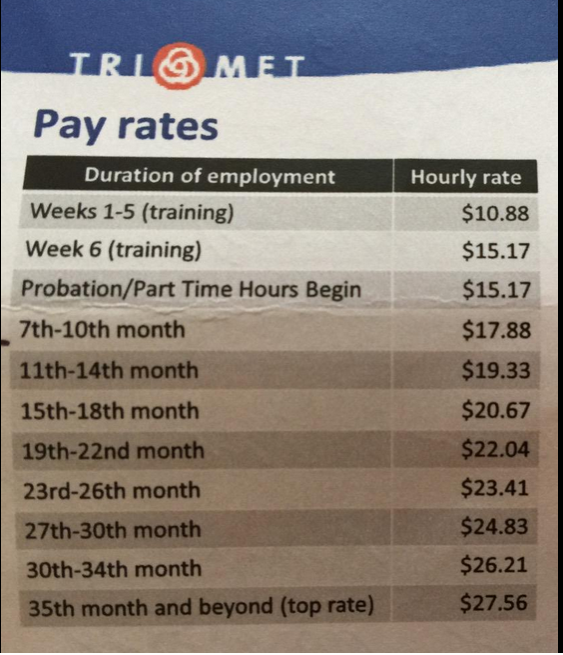 Can take you 3-6 years at Metro. Well here, ill let the union contract tell you:

BUT!! When you go from PT to FT:
A PTO who is selected for an FTO position will retain his/her part- time wage step and will be given appropriate wage progression credit for part-time service, provided there is no more than a two day break in service. Such credit shall be calculated by giving one-half credit for the period of time worked in that step, rounding upward to the nearest one-half month and applying that period to the full-time qualification date.

So TriMet gives you the top rate quicker than we do.

The fact that these transit Districts string out employees pay raises is nothing but exploitation. Do you think they do this with executive jobs?

Amtrak, UP and BNSF also do this, its all part of the union contract. I am curious what its purpose is. (and no it can't all be the propaganda you preach on here, this has been going on for years!)

It's just a method of exploiting the workforce. Forcing people to wait years to achieve pay scale at this type of work is strictly capitalist methodology. It's accepted as normal because people have been conditioned to accept it.

Shouldn't more experienced employees get paid more? They tend to make less mistakes and do better than newbies. (It probably also helps that more senior workers often have more say in a union and contract discussions.)

Overall, making almost $18 an hour out of probation seems pretty reasonable. I can understand if you have a family/house/etc and really need a good paying job now, especially given that historically it has taken years to go full time.

Actually it's a form of discrimination.
Everybody is doing the exact same work but some people are getting less pay.

It didn't used to be that way for your information. As soon as you were hired full-time you received the same exact pay as all the other full timers that changed in the early 90s.

Maybe it was the 80's actually. When the high lords decided to bring part timers in is when being a transit professional changed forever

What isn't fair is the trainees getting a huge raise while, retires don't get a cost of living increase at all this year.