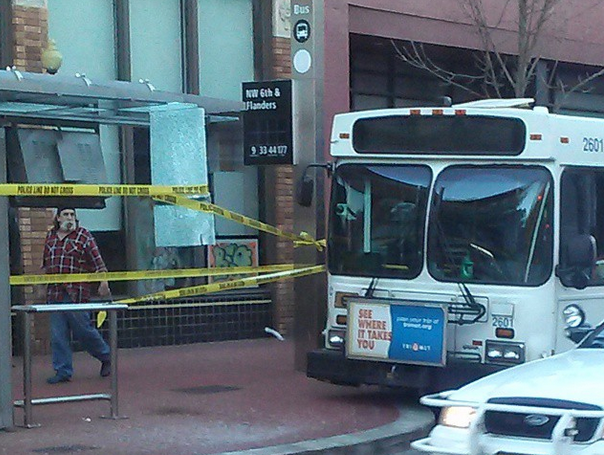 Mini on a 7hr split? Or misstook break for gas and panicked. on a side note Stewart Jolifee retired damn DUIs get you eveytime

Stewart Jolifee? He a trainer?

First of all, how would it impact MAX service? If anything pedestrians and bus riders on the 9, 33 and 44 routes would be the most impacted. The bus is clearly out of the MAX travel lane; the police car is what is blocking MAX. And geeze, it can easily move into the vehicular lane, or behind the bus, or around the corner.

Secondly, why is TriMet's tweet completely ignoring...well, the three bus lines that use this route? The 9 continues onto Broadway and into N.E., and the 44 continues to Mocks Crest. The 33 probably isn't as impacting seeing as it has just one stop to the end of its route, but there's still two routes whose riders will be directly impacted by the closure of this stop - and then any buses that have to be re-routed away.

First of all, how would it impact MAX service?

As for the police car pictured, it's unclear if it is parked there.

The 9 continues onto Broadway and into N.E.

Line 9 has not served NE for years now:
http://trimet.org/schedule/r009.htm

the 44 continues to Mocks Crest

Yes it does, but buses that do don't serve this stop. This stop is only for trips that end in the City Center.

Lastly, it's possible that buses were still able to serve the stop by stopping behind the bus involved.