Today March 16 at the Trimet circus 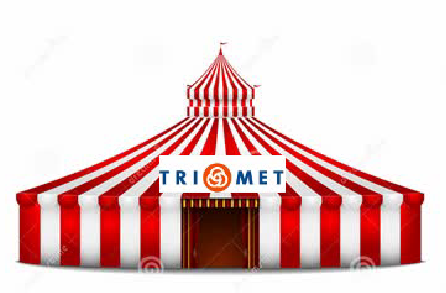 A daily report of tweets from people who are not having much fun at the
TRIMET CIRCUS!

@DaveKnowsPDX @bgrmosaic What I miss about the old mall was it seemed so much busier and more lively. Today's mall seems dead.
— Erik H. (@sp_redelectric) March 16, 2015

@trimet whats going on with blue line? Been at the bev TC and last 2 maxs havent showed up going to hillsboro.
— DJ Larson (@oOcHAWKOo) March 16, 2015

Shoutout to @trimet for getting me to work a HALF HOUR late this morning 😑 not sure why two buses didn't come on the 14...
— Kate Loftesness (@kateloftesness) March 16, 2015

Hey trimet, having a MAX train ignore people standing at the station for at least 30 seconds before pulling away is not
— Charles Gigi (@uzitalujesaxij) March 16, 2015

Another morning I think about giving up and going back home. Thanks, @trimet
— Shani Levin (@ShaniLevin) March 16, 2015

So @trimet is shutting down Max for 2 hours because of fatal accident pedestrian vs. Garbage truck. Getting off Max at Beaverton TC.
— - ̗̀CURL ̖́- (@e_sibe) March 16, 2015

Any of rain or snow or sleet or wind or power failures or down wires or car accidents will keep #trimet MAX on its expected delays.
— Nonpartisan (@nonpartisantoo) March 16, 2015

Damn all the buses coming in from RQ look like sardine cans #trimet
— #objectivelyterrible (@lazulisong) March 16, 2015

The max isn't running downtown. Wish it would have said something before I bought my ticket and got on the train @trimet
— Laura (@laurabububun) March 16, 2015

@trafficportland I didn't realize Twitter was the best spot to get @trimet updates. Seemed like info that should be on the train platform.
— Laura (@laurabububun) March 16, 2015

@trimet I have had a messed up commute everyday for the last week--get it together! 😡
— Shani Levin (@ShaniLevin) March 16, 2015

@pdxcommute I think it is funny #Trimet is tweeting a non Trimet collision is the cause of problems.
— Sean Matthews (@scminpdx) March 16, 2015

.@trimet On time bus passed by "ahead" so the late bus w/passengers is now waiting at stops to "reverse roles" another inexplicable policy
— SaraNBlank (@SaraNBlank) March 17, 2015

.@trimet unacceptable policy to have buses returning to city center not pick up people when it's clear the route is experiencing delays.
— SaraNBlank (@SaraNBlank) March 17, 2015

police after a hospital escapee on the #pdxstreetcar
— TriMet Scanner (@trimetscanner) March 17, 2015

Abandoned couch is on fire at 141st and Burnside
— TriMet Scanner (@trimetscanner) March 16, 2015