LANE JENSEN TRIES TO GET AN ANSWER FROM ROAD SUPERVISOR WAYNE 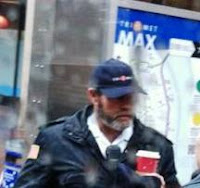 Of course Lane will get criticized for this although once again I see nothing in his actions objectionable.

He asked a reasonable question.

"Authority" figures need to think before they act. Wonder if Alex was going to work and ended up fired because a supervisor felt like pulling him off the train,
just because he 'could' and Alex had ended up getting fired?

The supervisor abused his authority. We are seeing to much of this lately.