OK lets take a look at these numbers,
1-operating revenues were up 19%
2-expenses increased 1%

Operationally Trimet is doing very well, as I have indicated in previous posts.

Then there is this:
The District’s total net assets at June 30, 2012, were $1,822,565, an increase of $69,438 or 4.0 percent from June 30, 2011
(see Table 1). Total assets increased $83,572, or 2.9 percent, and total liabilities increased $14,134 or 1.2 percent. The
increase in total assets is due primarily to increases in capital assets, offset by decreases in cash and investments of
$81,466 associated with the payment of debt service principal and interest and the utilization of restricted funds for
construction costs related to the Portland to Milwaukie light rail project. The increase in total liabilities is due primarily to
increases in Other postemployment benefits liability of $67,707, partially offset by principal payments made on bonds during
the year. 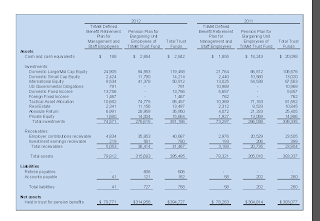