Why your bus passed you up

Very very few operators will intentionally pass up waiting riders (there are a handful). Almost all of the passed up riders were left behind because the driver didn't see them. Now as someone who watches the twitter feeds daily I have seen a HUGE uptick in the amount of tweets from riders who were passed up.

I think the main reason this is happening so often now is because Trimet has hired so many new people. I hear part time operators are now being elevated to full time before they are even off probation. Trimet prefers to hire people with no transit experience. That allows Trimet to instruct them on the way Trimet wants things to be.(aka: brainwashing)

The problem with that is that it takes years for a driver to become proficient in performing the tasks with some skill and professionalism. Newbies don't know the routes and don't know where the stops are. They are so focused on the road they don't see people waiting at stops. Below is the most recent list of brand new Trimet operators. There are 20 on that list. And this has been going on month after month. There are hundreds of 'newbies' behind the wheel of Trimet buses now. Trimet actually planned it that way I am positive. They did everything they could to see the veteran drivers out of there, especially the ones they couldn't control. (like me)

So the next time you get passed up that is most likely the reason. 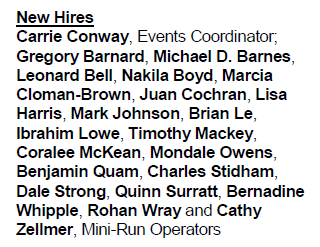 Nighttime drivers have it worse. Impossible at times to see riders dressed in dark clothes waiting in unlit areas.

As a relatively new driver it amazes me how many people yell at or even jump out at dead heading buses.