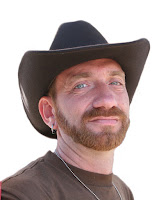 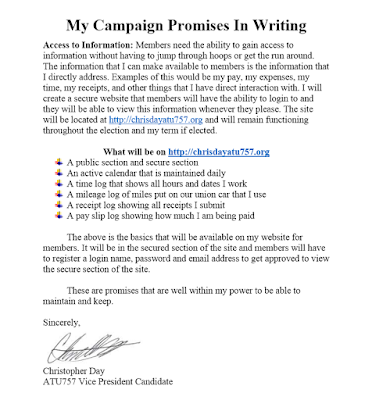 2003 – TriMet contract 2003-2009 negotiated and ratified.
2005 – Side letter created that takes TriMet Operators Breaks and meal time away and allowing that time to be classified as “Recover” time for the schedule.
2007 – ATU757 has Strike rights replaced with binding arbitration....
2009 – Binding arbitration fails, new contract 2009-2012 require members now to have to pay for 90/10 health benefits and retirees are hit as well.
2012 – TriMet requires members to pay for 80/20 health benefits or a higher rate for 90/10 the retirees were hit with this as well.

This is just some of the things that has taken place since Jon has been an officer in our union office. He has had some type of active role in all of these events. In Jon Hunt’s video he states “that past leadership styles did not produce the best results” as you can see he is right.

The majority of Chris Day web site states, "I am still working on this section please check back." Really? Unprepared, inexperienced AND if he gets his secure members web site you need to get approved. Does not sound like Mr. Day is going to be inclusive to all members.

Maybe he should take time to get his personal life in order. Mr. Day does not represent himself very well in his day to day affairs. I certainly don't want him representing me.

It is true that I had a bankruptcy in 2005 (I think) (It might be 2006) and I fell behind on some of my bills so I had to address some debt collectors. There has been times that I have not been the best with my personal money and it is something that happened and I have been working on getting back on track. I have gotten almost everything caught back up and it is something that can’t be done overnight. If you want to judge me on my credit history then maybe I am not the choice for you. The position I am running for is not the Secretary/Treasurer position.

On March 12, 2016 I started work on my campaign site. I also help take care of my ex’s son and this was my weekend to have time so I was limited on the time I can spend to build on the site. Member’s started asking about getting a website up and so I put something simple and quick just to get something going. I will be working on the info site throughout this week during my off time from my 9 hour shift.

As for the secure site, yes if members are interested in having access they must register and be confirmed before being able to have access to view receipts, my schedule, my pay, our union car mileage and other information that is only intended for members. I will not just let any random person freely viewing information that is only important to our members. No member who registers will be refused access. The registration is a security measure for our members.

Your response sounds like rationalizations and excuses. You did not address your current finances that are in collection now from last month and from last year too. You can't keep your word to yourself and get your life in order.

Just because those are on your credit report does not mean that they have not been addressed. You are just trying your best to make a big deal about something so that you can get others to view me poorly. Face it these are the worst items you can find on me and you are attempting to make a big deal about it in hopes that it would distract from Jon’s DUI while driving our union car. This is the last I will address this issue.

Distract from Jon's DUI? It happened 6 years ago and you want to beat it to death every time you talk to somebody. Your credit issues are from last month! If you are not responsible in your personal life on something like paying you bills on time, you certainly can't be entrusted with union office.

In the past you have turned in fellow employees like Ellen Fox to managers. What kind of a union officer would do something like that? Not the kind of union officer anyone should vote for, that's for sure!

Wow! Watch Chris Day video. Are you so inept that you can not just get on camera and speak? Looks like it when you read everything. I don't want a vice president that needs notes for the most basic topic to communicate on. Management at the properties represented by the ATU757 are not going to wait for you to write your script and prepare notes. You need to be able to have skill to step up and deal with the situation. Apparently you do not have the most basic skills to do so. This union is so screwed if Mr. Day is elected. DO NOT VOTE FOR CHRISTOPHER DAY!