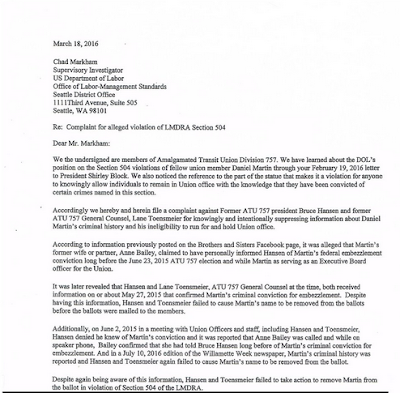 Wow the perception machine steamrolls on! Blame Bruce for 20 years of 757 wrongdoings. Dan was elected to a Union office before Bruce was President.(fact) If there is a complaint to Labor it should include the President, lawyer, and Election Committee in office when Dan first ran for any Union office.

A month back Al expressed the perceptions about Bruce "last minute to make this deal...lock out Hunt" "Understand McFarlane needed that decision at that time" The fact is McFarlane didn't care he was violating court orders-he wasn't in danger of going to jail- and wanted to 'pass go' to Arbitration. Al says he pays attention but that's why it's puzzling to not understand the order of negotiations to mediation to arbitration. Mediations are closed door meetings but they're with the whole team behind the door unless someone (Hunt) goes on vacation during the negotiations. Hunt was not locked out(fact). When mediation fails, the next step is Arbitration(fact). Union lost last Arbitration because TriMet has financial failings(fact). TriMet still has financial failings(fact). Members don't get a voice in Arbitration (fact).

You said Bruce never made a stand or led a protest? He did consider and blueprint an illegal (thanks Hunt) strike, even discussing with his grade schoolers that he would go to jail!
A President has an obligation to give the membership a voice. That means giving them something to vote on- not recklessly gambling on Arbitration after the State Audit confirmed TriMet's financial failings. Members approving the Contract did not attack retirees, their vote reduced benefits for themselves and that impacted retirees. The financial issues are real and its not fair to balance it on the members. But tell Enron retirees or the pensions that were in Lehman Brother's.

TriMet wants Shirley as President - I bet they have each required negotiation day mapped out, plans to hit the minimum marks in mediation and fix the financials with a TriMet favorable Arbitration. That could make the current pain for retirees feel like a cold compared to cancer.

You didn't watch the video below where Stemen clearly states he wants Bruce?

This complaint didn't come from me

It is true to my way of thinking that arbitrations are a stacked deck but I would imagine some decent statisticians/attorneys can make a pretty decent case for double standards laid out by Herr Mcfarlane and his henchmen who feast at the trough of tax payers while the working class toils endlessly for less and less.

Couple that wit's "working to the rules" and refusal to do RDO work, especially at rail because the rail drivers are the most vital part of Trimet

Alas, this split with 2 factions at each other's throats is the real enemy and that is why we keep losing

Time for something different

Did we not have a election committee?

Did not mean to infer that Al made the complaint. Reading the complaint, it is political gotcha - Bruce couldn't dismiss Dan based on hearsay. "Marissa is a zebra not fit to serve, let me call Jacques while we all sit here and he'll tell you she's a zebra." Is the President authorized to run background checks? Seems like the job of the Election Committee.

Why didn't the leadership (if you can call it that) come together and invite each candidate to speak to the Board to present a united front line? Shirley and Jon can't get out of their own way, maybe their hired guns can get us on track.

Al, how do you answer $28000 to $1.2 million? Yes, Mary did a good job but that's with Bruce's lead. I've seen solid financial folks whose leader would say "Oh, don't worry about that! Come on leave that and let's do this instead!"