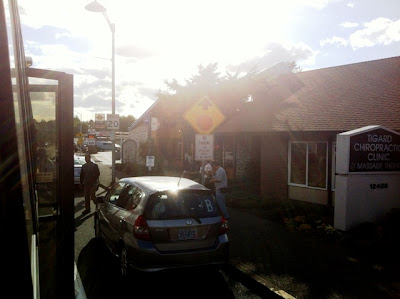 This is the "New and Improved" outbound 94 stop for express trips to Sherwood, located on the north side of Main Street, just west of Tigard Avenue.

Notice there are multiple failures here:


1.  Parking is allowed, blocking the view of the bus stop
2.  As a result, the bus is not ADA compliant - it forces riders to walk off the sidewalk and board in the street.
3.  There are no shelters or other amentities - despite being a brand new stop which should have a shelter, bench, schedule sign.
4.  Strangely enough, the existing 45 (and formerly 12) stop is located just 1/2 block west of here.  It's still there for the 45.  This situation also crops up on the east end of Main Street where the 94 stops with the 76/78 stop at Scoffins, then the 12 has its own stop just before 99W, then the 94 has its own stop ON 99W.  This doesn't make catching the bus easy for anyone...
5.  There is absolutely no signage for helping riders get to and from this stop from the Tigard TC; yet TriMet goes out of its way to add signage to direct riders to a MAX stop.

TriMet has told me "they are investigating this" but it's another example of when it's a bus change, it all seems to be thrown together at the last second with no attention to detail.  When it's a MAX/WES/Streetcar project, TriMet throws it's massive Capital Projects department at it, and will readily spend half a million dollars to build a fully improved stop with landscaping, signage, TVMs, etc.

Here's an example of a similarly aged MAX station - despite being a "drop off only" MAX station, it has benches, trees, big wide sidewalks, large signs...: 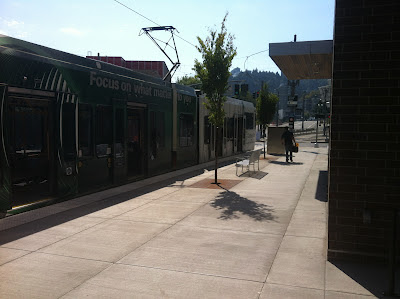 despite being a "drop off only" MAX station, it has benches, trees, big wide sidewalks, large signs...:

As you were told before, this station won't be "drop off only" for long, and it's in an area that can benefit/use the urban treatment (which may very well be a code requirement).

So, Jason, please justify why a brand new bus stop deserves basically nothing for investment despite it being an important stop, but TriMet has to spend hundreds of thousands for a MAX stop that isn't even fully necessary for years.

Explain why benches are needed at a MAX stop that is factually a "drop off only" stop, but there's no benches for a bus stop where people need to wait. Or a shelter, or any other amenities.

And if it's a code requirement, then are you saying that TriMet has several thousand bus stops in Portland city limits, subject to the same exact code, that are not in code compliance?

2. As Max told you before, rail projects bring in outside money, and where there's money, there's ability to have nice stops (I believe this is also true for buses in Milwaukie).

Also, no construction happened at the Tigard stop, so nothing was required.

hundreds of thousands for a MAX stop that isn't even fully necessary for years.

It's open for riders to get off the train at right now. Not in years.

Also, it's a sidewalk, too, and not just a MAX station. There are benches in downtown Portland besides at MAX stations.