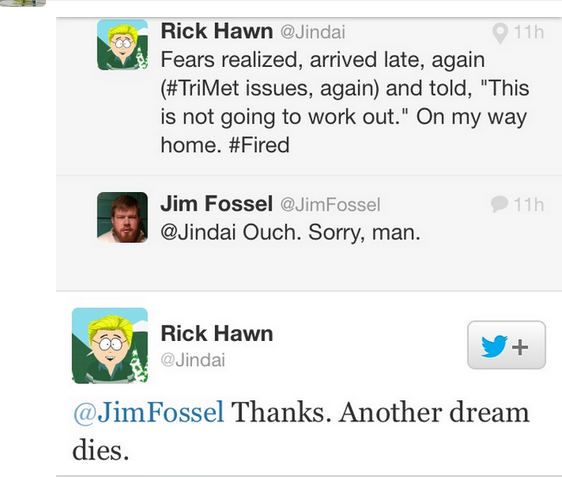 That's pretty bad. I'd suggest a lawsuit, but it would just devolve into "he said, she said".

These are the real, gritty stories of TriMet's failure to deliver. Where's Fox news when you need them?

What about personal responsibility? Wouldn't any company fire some for being "late again"?

Everyone knows personal responsibility is for someone else, just ask Tri-Met management.

Isn't this how Lane started out?

Personal responsibility must be balanced with reasonableness. If the trip should only be 45 minutes, it's unreasonable to expect someone to leave three hours early just to account for TriMet's screwups. However, leaving an additional 30, maybe 45 minutes earlier is not that unreasonable. It's a cost of doing business if you're going to use TriMet.

True, but even TM will give you an oversleep or missout if you arrive late, even if their bus or train is the cause. So you end up taking g the one before the one you need to plan for it cause its likely to happen..just ride TM once to know that!

Oversleep, or missout? If we are late, we lose our 8hr guarantee, get put on report, and are now guaranteed 1hr of pay, unless they find work for you. This is the case for any excuse. You can later fight to be paid for it, based on your chosen excuse.

Sure is how I started.
When I was working in NE and living in Hillsboro, I had to be to work by 12pm. I would leave at 8am to give myself an extra 2 hours in case the max broke. We all know it takes at least an hour to get a bus bridge rolling, if not two.