LATEST EDITION OF SEEN AND HEARD ON TRIMET

But not seen on TRIMET'S HOW WE ROLL BLOG!
TRIMET SCANNER TWEETS HERE! 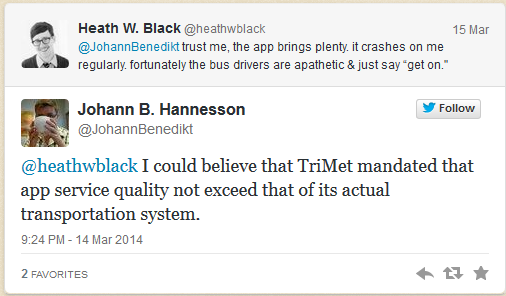 Oh @trimet you are funny when your MAX is super late to tell me to wait for the phantom MAX that's "just behind" you. No thanks.
— Christopher Gorton (@gortoncj) March 17, 2014

Why I drive. RT @Dan_Christensen: Woman changing diaper ran out of hands and dropped the diaper on her foot... Butter side down... #trimet
— Bryan Dorr (@BJDorr) March 17, 2014

My @trimet bus driver just yelled at me as I stepped onto the bus, as my coffee (which was half full) needed a lid. Lovely communication.
— jess sconé (@getsconed) March 17, 2014

In all my miles on #Trimet I can count in one hand the number if times I've seen a man give up his seat in the priority seating area.
— Jessica (@BluePlasticJess) March 17, 2014

Fucking hell Portland. When a person with crutches gets on the bus, stand your able-bodied ass up so they can sit at the front. #Trimet
— Jessica (@BluePlasticJess) March 17, 2014

hey @pdxcommute @trimet lols RT @pdxmele: There is seriously a guy taking hits off a can of whipped cream on this MAX train. Not kidding.
— tedder of 42 (@tedder42) March 17, 2014

If @trimet doesn't answer my calls and give me my damn ticket and driver's license back, I'm suing them..😒
— Caroline (@idontrlycarol) March 18, 2014

I was worried I was going to get home too quickly, then @trimet did me a solid by stopping in the middle of nowhere for no reason. Phew.
— Fred Wenzel (@fwenzel) March 18, 2014

TriMet has advised that Max trains are currently running approximately 30 minutes behind schedule- for the next couple of hours.
— flypdx (@flypdx) March 21, 2014

@trimet I wait ~20 min for a blue line train to arrive and it's not in service. What gives? #rushhour pic.twitter.com/blcSax9uoF
— David Owen (@oviddawen) March 21, 2014

@trimet is trying to break my heart. 4 out of 6 MAX trains ridden delayed this week.
— Robin Straughan (@wholeworldbags) March 21, 2014

#Trimet has us getting off a Hillsboro bound blue train downtown so it can be used to go eastbound.
— Dan Fisher (@Danielwfisher) March 20, 2014

@thubten @PDXTechMeetup My @TriMet iPhone ticket app was failing, so I ended up going for a long walk in the woods instead. #portlandmoment
— christian perry (@sfbeta) March 20, 2014

I'm on a super crowded trimet bus and it's making me anxious. Fuck this.
— Skyler O'Keefe (@Skylerquitsthis) March 20, 2014

I was running late yesterday and got a ZipCar instead of taking the MAX. It looks like that was a good decision: http://t.co/eTyzQCv3JH
— David Barry (@DavidBarry_) March 20, 2014

A child molester and gangster arguing about who is more moral. #trimet
— Christopher Morris (@loadoflaughs) March 20, 2014

You know the Max is off schedule when multiple people are running across traffic cc @trimet
— Danish Aziz (@parakweets) March 20, 2014

#trimet has has a decent number of stops, but the buses and trains are always late + the ticket machines are broken. >:( @alyourpalster
— Sequelcast (@Sequelcast) March 20, 2014

The amount of absurdity that occurs on @trimet is astounding and amazingly entertaining. #pdxlove
— bryanhockaday (@bryanhockaday) March 20, 2014

@WashCoScanner what is going on with the 57 trimet on they coming out of corn? Transit pd cut us off flipped a u and pulled them over again
— Niki Swearingin (@NikilovesDavid) March 20, 2014

I think whatever happened to that Malaysian airplane also happened to the #6 bus @trimet #trimet
— Eliz Roser (@elizroser) March 20, 2014

@trimet so it really sucks when the bus you are counting on all of a sudden disappears from the transit tracker. #whereisthesix
— Jamie Killpack (@RCTIDKillpack) March 20, 2014

@D_bearrr I'm sorry :/ I want a car so bad but I don't wanna pay for everything that goes with it 😞 Trimet really sucks though
— Josey Anthony-Moore (@josey_anthony) March 19, 2014

Dear Trimet, I know we're kinda spoiled here, but it is still completely unacceptable that the max does not show up when it should. 😡
— Transit Trekker (@TransitTrekker) March 19, 2014

@trimet unruly people at the 10th and Alder Max. This location and the one by Courthouse need policing.
— PDX Dave (@davelackman) March 22, 2014

Is it a requirement to have a stick up your ass to be a Trimet fare inspector?
— DR. Perry (@SwaggotyAnne) March 22, 2014

Only on Trimet people would be talking about injecting heroin
— Anna Schneider (@blue4678) March 22, 2014

@trimet Will the MAX signs indicating the color/train *ever* match what train we're actually riding? They should all just say "Good Luck!"
— HaveAKiKi (@BagOfTaints) March 22, 2014

Trimet app told me the bus would be quicker but more expensive. The trolley went by five minutes ago and it would’ve cost $2 instead of $5
— Hisashi T Fujinaka (@htodd) March 22, 2014

@Down13F (con'd) total shame* Now, the rest of this month is fucked up because for an All-Day pass on TriMet buses and MAX trains… (con'd)
— Tera Lynn Hopkins (@TinyPrideFreak) March 22, 2014

Guy with earbuds & music player is sitting quietly on MAX. Dude with no earbuds & no music is seat-dancing to the voices in his head #TriMet
— Ron (@TelemachusRome) March 22, 2014

Why doesn't the Trimet driver ever ask if *I'd* like securement today?

This recurring "drivers who drive into the train tunnel" problem seems like it could be solved with snipers, no? #max #trimet

Well, an hour & a half late for work is better than never. #Trimet #pdxtraffic

Thanks @trimet. I'm only going to be an hour late after a 3 hour commute. I am sure it could have been worse. Good work guys!

Seems like @trimet is completely incapable of handling disruptions.

Thank you Twitter for telling me more than @trimet or my max operator did. Got off at Beaverton TC to catch an empty 20. Best idea ever!