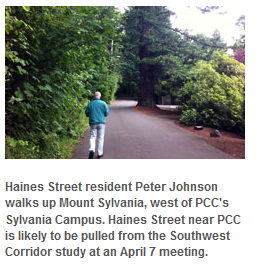 Residents of a quiet Southwest Portland neighborhood got welcome news last week, when they found that Haines Street was all but off the table for a possible high capacity transit route.
The Haines Street transit route was one of several – including a transit tunnel under Multnomah Village and a line through the South Waterfront – that Metro and TriMet staff are suggesting to table as possible routes for a transit line between Portland and Tualatin.
A number of routes between Tigard and Tualatin are also likely to be cut off from consideration for either light rail or bus rapid transit. A decision on whether to use trains or buses in the corridor – if the project proceeds forward at all – is still years away. Haines Street, other routes likely to be pulled from Southwest Corridor study | Metro News
Posted by Al M at 7:29 PM

Build an express toll road where ALL users pay.

Bus pays, trimet supervisor joy ridding pays, police cars pay, ambulance pays, everyone pays! Then only those with genuine business will populate it and hence, it WILL BE express.

It's been my experience that the Freebie folks seem to selfishly hinder the paying folks time, what about you?

Note: People with business to do usually don't need a whole lot of public services because they are Fucking Busy getting shit done.