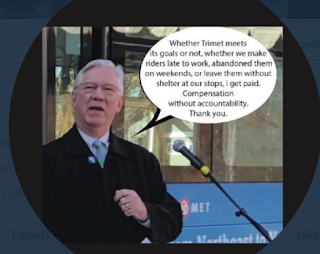 Kelsey, Mcfarlane's handpicked successor ,is heading back to Canada. He was basically a Mcfarlane clone. From my point of view he was nothing. He did nothing of consequence to bother mentioning.

“Under Doug’s strategic leadership, TriMet has made significant progress on growing transit service, improving the customer experience, decriminalizing fare enforcement, pursuing more equitable security resources, and championing diversity and equity. We are a better agency because of Doug,” Warner said.

Obviously he didn't "grow" transit, so he made that up.

"Improving the customer experience" uh I don't think so.

The whole "diversity and equity" nonsense is part of the whole new world order bullshit that we the people are forced to endure. Black faces in high places doesn't mean shit if they are towing the neoliberal line.

So its all bullshit, Doug made himself about a million bucks in the years he was here and will have some sort of pension I'm sure. It's win/win for him.

Meanwhile the drivers suffer from the collapsing world around them, no hazard pay, no improved health benefits, no nothing. The union busting continues unabated