TriMet the master of 'spin' 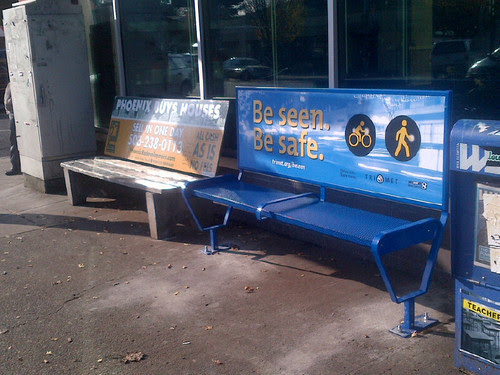 In a ridiculous piece of spin doctoring, TriMet has announced on its website that, in exchange for free advertising, Lamar Advertising is providing 600 “upgraded” benches at bus stops. What “upgraded” means is that the benches have a raised rail in the middle, so that there isn’t enough room for a person to lie down.
The purpose of these benches (which are also used in Phoenix, AZ) is to make it impossible for homeless people to sleep on them.
Mental Health Association of Portland has started a hashtag on Twitter:
#hurtsthehomeless @trimet @LamarOOH

Did TriMet misrepresent the reason behind their new “leaner” benches? | Village Portland
Posted by Al M at 12:49 PM