The sham that has become Trimet

Trimet has gone from a transit agency to an agency obsessed with capital projects. The entire agency has been hijacked by the capital projects division and the appointment of Neil Mcfarlane to head Trimet proves the point. He was the director of the capital projects division for years. The endless hiring of bureaucrats and executives has taken a real toll on direct service delivery. Don't forget that for each person that sits behind a desk or goes to meetings there could be one or two full time bus/train drivers. With Kitzhaber in control there is no hoping this will change anytime soon.
Trimet has clearly lost its way. Many executives have found that out for themselves and have chosen to move on from the once well regarded transit agency. Trimet no longer makes any of the lists for 'best of' transit services. Although the propaganda department works night and day to continue convincing the public how wonderful Trimet is most of the public is not fooled any longer. They see the situation for what it is. Trimet has become a very average transit district for a small city. Decent service during commute hours then nothing to brag about nights and weekends.
Trimet functions without the slightest bit of oversight. They are completely unaccountable for every single failure that has occurred since Mcfarlane took over.
The entire agency is nothing but a sham and a way for those in charge to get rich.

of course there are no fill drivers (just plenty of executives hogging down the $) http://t.co/Jsz3u33vfd http://t.co/ALmyTvlxB0
— TriMet Scanner (@trimetscanner) December 25, 2013

The trimet public budget is 303 pages of hard to understand data
We don't have a breakdown of all the managers/assistant managers/executives/ mid level executives involved with the operations division but that is in the millions. 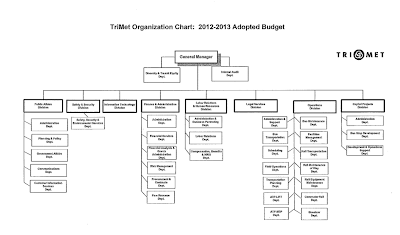 What it really boils down to is that Neil McFarlane has 10 reporting departments or divisions.

Only ONE of them is involved in the day-to-day operations of the agency.

Frankly, Operations needs to be broken up because it is just one massively large organization - Rail Ops and Bus Ops, and then take Bus Ops and divide it west and east; things like Legal, H.R., and I.T. really don't need separate Directors (they can all fall under one "Administrative Services Director".