Say you're a Trimet PUBLIC INFORMATION OFFICER   and some guy you knew was obnoxious wanted to get some information from you but you decided that you're not going to answer that guy, even though your job description specifically states you are to answer questions from citizens. And since you ignored that person he decided to bombard you with the same question over and over. Say this is the question 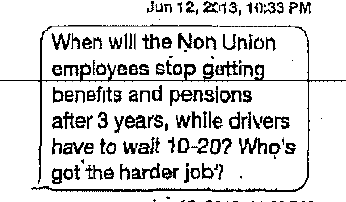 
A-answer his question
B-call him and tell him to fuck off
C-block his phone number
D-report it to the police.

So we can see that the text message we are speaking of implies great threats to the safety of the public information officer-NOT!
No if it was me I would have simply called him back and answered the question and be done with it.
But not Roberta Aldstadt and her Trimet bosses, no they decided to call the police and block his number. (and for some unknown reason she decided to unblock it later)

C, is my choice. I would have blocked his phone and be done with it. As PIO, I wouldn't be in a position nor qualified to give an accurate answer to that particular question.

When you say "I would have simply called him back and answered the question and be done with it." how would you have expected Alstadt to have answered that? She would have had to ask somebody in Mc Farlane's office for an "official" response if you wanted her to answer that particular question.

Although well paid, Alstadt really isn't in a decision making capacity at the agency. She's really a parrot in that any question that the media or public might ask, she is directed to give the canned company/agency response. A PIO is a liaison rather than being directly involved in decision making at agency and is expected to give the TriMet a positive image no matter the situation ...just like she did on the KGW interview following the Thompson assault --"we do everything that we can to provide the best safety both for our riders and for our employees..." blah, blah, blah, blah.

So how should she have responded to Lane's other question "So what is it going to take to get safety on the buses? How many more lives will it take? 1? 10? 100? 1,000? A driver being killed while in the seat?” ...the same response would have been appropriate: "we do everything that we can to provide the best safety both for our riders and for our employees" ...PERIOD, "Thanks for asking, Lane, we appreciate your taking the time to inquire." That's all she had to say in response to his texts.

But nooooooooooooooooooo, she had to over-emphasize to the public her superiority and self-importance by taking the ridiculous set of actions she did by getting the police involved and what will amount to unjustifiably spending thousands of the agency's dollars in literally snuffing out Lane's constitutional rights and putting him through grief that is totally unnecessary for the circumstances.

Lane needs to hire a First Amendment attorney. They won't change unless they win then a percentage. Once it's filed and served the transit company will become the laughing stock of the nation. You may not like what he says or how he says it but you better damned well prepare to fight to your death for his right to say it.

The answer to that particular question is that there is no answer.

Then how could you have "simply called him back and ANSWERED the question and be done with it." ...??

Not trying to be a smart ass, Al, just playing devil's advocate for the sake of argument. :p

That's what she coulda said.
"Lane I don't have an answer to your queston" end of story

lol, okay, I think we can agree on both accounts with that response.

Ya I mean the worst (and arrogant) thing to do is ignore him.
They didn't like him but he was providing another source of information but in their arrogance they just decided to ignore him and when he wouldn't be ignored they put him in jail. Just wonderful

It would have been easier for Roberta to have answered the text or directed Lane to someone who could answer his question. Simple done and over with, life goes on.
Now Roberta is going to have to sit in court and face Lane for days with 12 jurors’ judging her for her drama queen behavior over a text about benefits’ and safety. She will have to take the stand. She will be examined by Lane's attorney.
There will be no script for her to read or someone telling her what to say. She will fall apart under the pressure. Her reputation will be soiled. And those she lied for about Lane will turn their backs on her and let her sink.
Roberta will never have creditability again and when Tri Met boots her out the door she will be a broken woman with no job and no friends.
My prediction is that Roberta Alstadt will be the next one to leave Tri Met for another job and the charges will be dropped.