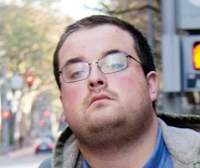 Anti-TriMet blogger Lane Jensen has deleted his website after being arrested for the second time this year in connection to charges that he harassed transit agency spokeswoman Roberta Altstadt with repeated text messages (“A Visit From the TriMet Squad,” WW, Oct. 31, 2013). Jensen was arrested Oct. 17 on 31 counts of telephone harassment of Altstadt. On Dec. 7, Jensen aired a podcast taunting transit officials. “Sorry, TriMet managers,” he wrote on his blog, Portland Transit Lane. “You might be able to tell me what I can type, but it’s totally different when I start a podcast.” It wasn’t. Transit police arrested Jensen again Dec. 17 for violating the terms of his release by talking obscenely about Altstadt in the audio. Jensen was bailed out by fellow TriMet watchdog blogger Al Margulies the next day. Jensen tells WW he doesn’t know if he’ll ever reboot his blog.
Murmurs: All The News That’s Left Under The Tree.
Posted by Al M at 12:11 PM