How many TriMet employees does an incident take?

TriMet block 1102 was involved (but with minor damage to the bus) in a major crash on I-5 northbound.  It is believed that covering the run and dealing with the incident took 8 employees: 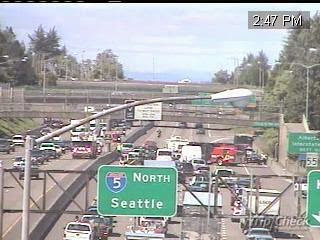 It reminded me of this incident: "Laurel and Hardy, Three Stooges, Keystone Kops" at TriMet
Posted by Jason McHuff at 6:11 PM