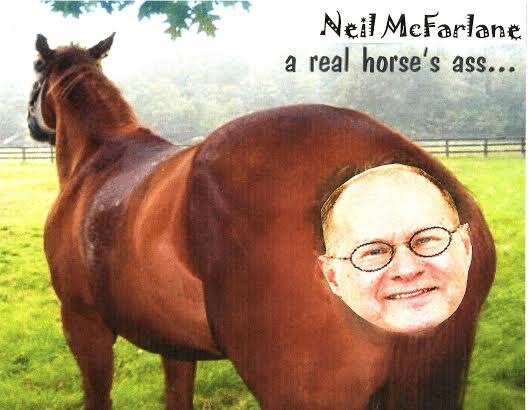 Al, I hope you have a lawyer. ANy time now you are going to be sued for defamation. Are your juvenile attempts at humor really worth it?

Defamation—also called calumny, vilification, or traducement—is the communication of a false statement that harms the reputation of an individual, business, product, group, government, religion, or nation. Most jurisdictions allow legal action to deter various kinds of defamation and retaliate against groundless criticism.

Calling someone a 'dickhead' or a 'horses ass' is an opinion!
I can state opinions on people, especially public figures like Mcfarlane.
Believe me, I know everything that can be known on this topic.

Al might be a lot of things, but an easily duped patsy isn't one of em.

But McFarlane intentionaly lets the Oregonian and Pamplin slander and defame drivers continuosly with bogus miss information and lies. Putting drivers lifes at risk because of his propoganda. Hay Neil no pun intended but if all four of the horse shoes fit then you must wear the image that you deserve.