'From the Trimet drivers side' takes on the service animal policy 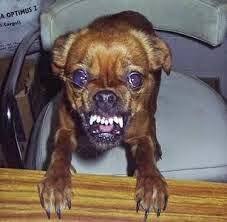 It is a good idea, politically anyway, to give people who use service animals in various capacities, the benefit of the doubt. However, such goodwill can sometimes border on the absurd. Before I go into details, here's what our Standard Operating Procedures (SOPs) have to say about service animals:

Okay, so it's very forgiving. The word 'ludicrous' comes to mind. Why? Because human nature being what it is, people can manipulate rules to the point where they don't follow them at all. Those who truly have trained service animals aside, I've seen many dogs and cats brought aboard by people who haven't the slightest clue what training an animal entails. They're out to buck the system. They just want to take Fido with them, so they'll just say he's a service animal. Boom. Free ride for Fido, no hassle.

(Since mostly what we see out there in the form of service animals are dogs, I will use them as a reference here.)

Drivers do not have the right to ask what their animal has been trained to do. But if we were allowed, and we did ask, what if they stammer and hem and haw before coming up with a comically lame answer? "Um, he wakes me up when I go to sleep." Or, "he keeps me calm because I'm a nervous person". Really? Perhaps they're telling the truth, but I'll bet the lug nuts on my bus that many of them are telling stories. Just like the multitudes with "Honored" passes who simply cannot (or refuse to) pay full fare to ride the bus to their soccer practice.