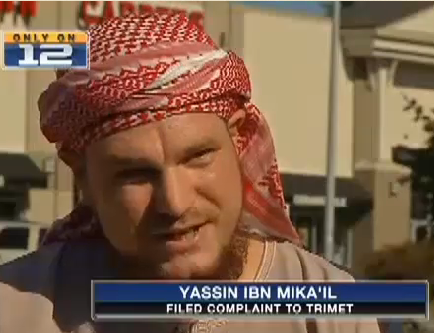 This incident is a bunch of BS, has no newsworthy value whatsoever but as we know the media loves to make a big deal whenever a bus driver 'screws up'.  The driver cracked a bad joke about the 'jihad' and apparently things escalated from there. The driver didn't deny the man a ride and didn't harass the man but the whole thing makes the media. It's a tempest in a teapot. No harm was done to the the complainant other than his feelings getting hurt. Of course the poor bus driver is working in one of the over the top 'politically correct' work places in Oregon. At Trimet you can never say how you actually feel if it might offend someone. You walk on eggshells your entire shift  working at Trimet. The Trimet bureaucrats have a whole department of overpaid pencil necks that live for this sort of thing called Human Resources.


TriMet rider Yassin Ibn Mika'il has filed a discrimination complaint against the transit agency, claiming a driver asked him "how's the jihad going for you?" when he stepped onto a No. 94 bus in Tigard wearing his Muslim headscarf.
But that's not the whole story, according to a rider who was on the same crowded Tigard-to-Sherwood bus on Aug. 29.
Chris Gale of Tigard said the driver was provoked after Ibn Mika'il started an argument and wouldn't back off.
"When he got on, he asked if the bus had air-conditioning," Gale said. "When the driver said no, he demanded to be let off, but the driver had already left the stop."
Ibn Mika'il stood near the driver and began to complain loudly as the bus moved through heavy traffic, "which the driver took for about 20 seconds," Gale said.
The two men exchanged heated words, with Ibn Mika'il finally demanding that the bus be stopped and a supervisor called, Gale said.
"We pulled over and waited for a supervisor," he said.
Did the driver make a snide comment about jihad during the confrontation?
"No other passengers heard it, but the driver did tell the supervisor he said it," Gale sad.
At the same time, Gale said the driver had already been dealing with a rude passenger who was haranguing him for not making a courtesy stop along a long stretch of Oregon 99W. "That guy finally gets off. And then, right after that, (Ibn Mika'il) gets on," Gale said. "That poor driver was taking a lot of abuse."
As the riders waited for the TriMet supervisor to arrive, Gale said the driver and Ibn Mika'il continued their back and forth. He said Ibn Mika'il was cussing so much during the conversation that a family with two small children got off the bus.
"The half dozen or so of us that stayed on the bus all filled out comment cards, which to my knowledge all supported the driver," Gale said.  "I included my contact info, but the have not been called by TriMet about it."
TriMet said it is investigating Ibn Mika'il's complaint. "We contacted the operator and the matter is currently under investigation," said TriMet spokeswoman Mary Fetsch. "We take this complaint seriously and have launched an internal investigation."
Because it involves a personnel matter, Fetsch said she couldn't release many details about the case. TriMet denied The Orgeonian's requests to see a copy of Mika'il's complaint or any rider commendations for the driver. "We can't release any information while the personnel matter is under investigation," Fetsch said.
Ibn Mika'il of Sherwood has not responded to The Oregonian's requests for an interview. However, he told FOX 12 that he believes the driver discriminated against him because of his religion and said the supervisor was opposed to including the "jihad" comment in his report on the incident.
-- Joseph Rose
Rider: Muslim man started argument with TriMet bus driver, leading to reported 'jihad' remark | OregonLive.com
Posted by Al M at 2:27 PM

When I saw this guy on TV I kept thinking it was a punchline to a joke. 'Crazy Guy gets on the bus, dressed like..."
Bust driver says...
I want to know if he is really Islamic or if this is a Three Wisemen costume he found at GoodWill. Portland has some awesome GoodWill stores.