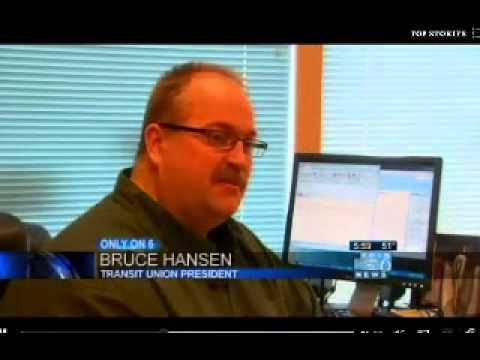 Bruce Hansen, President of the Amalgamated Transit Union Local 757 (ATU) said the Union’s members have voted to ratify a new TriMet contract. ATU ballots were counted today; TriMet’s Board of Directors unanimously approved the agreement earlier this week. The four-year contract goes into effect immediately, its term being December 1, 2012 through November 30, 2016.

ATU President Bruce Hansen praised the elected property officers (his lackeys) who made up the ATU’s bargaining team. He also praised the state Conciliator, Janet Gilman, who mediated the settlement and “whose efforts made finding the common ground possible.”(what common ground? Mcfarlane got everything he wanted which was union members to give up 100% health care coverage and accept 80/20 coverage along with forcing union members to make premium payments)

“Our members fulfilled their commitment to their passengers and the citizens of the community by accepting reduced health care benefits,” says Hansen. The next step is TriMet’s. (and exactly how will this translate to benefiting riders and not benefiting Trimet capital project aspirations)

Hansen notes that, in recent months, the parties have moved toward more effective cooperation such that they have been able to successfully resolve a number of outstanding issues.(like forcing hours of service and  block signup down operators throats)  “But the gigantic elephant in the room is that 44-years of TriMet failing to fund its promises to its current and future retirees. That is the issue that needs to be addressed in the next two years. It is my hope that the new trend toward cooperation will help make that happen.” (You're not listening Bruce? Trimet got what it wanted, you handed it to them, they no longer have this excuse. We shall see what will happen next year when this process starts all over again )
Posted by Al M at 3:27 PM

Perhaps Bruce should read the Portland Tribune article! ATU members saved 782 million over 30 years. I'm not sure if he isn't listening or doesn't understand what he just did to the membership. Next negotiations we better have someone else in charge!! Go Shirley!!

Well the members did vote yes so its not really on Bruce now.

He got the members to approve.

Of course the members didn't really have all the facts and were subjected to the scare tactics so there's that, but they did vote yes.

Not in my opinion, Bruce is the leader of ATU 757 Bruce led ATU members to accept a substandard contract. He will blame the membership but it's Bruce Hansen and Randy Stedman's name on the paper!

True but once again the voting members believed him, its supposedly 82% which i personally have a very hard time believing.

The fix was in the day it was announced.

The maintenance employees need to break out of the ATU and join a real union with backbone. I don't what would be involved to do this but it would be worth looking into.

2007 arbitration law. Best public interest, agency ability to pay. There was no fix. Read the law. Almost wish the vote had gone the other way so you pillow biters could have been fucked harder than what we already are. Maybe then you'd get who did it to you.
Did you already forget the results of the 2012 arbitration?. Geeze
Focus people.

I appreciate your defense of this whole deal so y did Bruce wait his entire term to come to this conclusion. Even Trimet said that 'there was no guarentee' that they would win the arbitration. I think the defeatest attitude guarenteed the worst possible deal. Mcfarlane got EVERYTHING he wanted. What did the union get in return?

With the beat of the continued "Fear" drum from Bruce it's nice of him to let TriMet know he is afraid to lead his members in arbitration. Bruce agrees with arbitration, but arbitration doesn't work if you are afraid of it. Stedman wanted 47 million from this contract and he got 50million and who knows whats in the details. TriMet is having a job fair in November I bet they will be looking for apprentice and journey workers for maintenance. He didn't just screw retirees, operators with the route blocking he screwed maintenance too, at least he screwed everyone and not just one group.

the correct number is $368 million Won in this contract.
HB