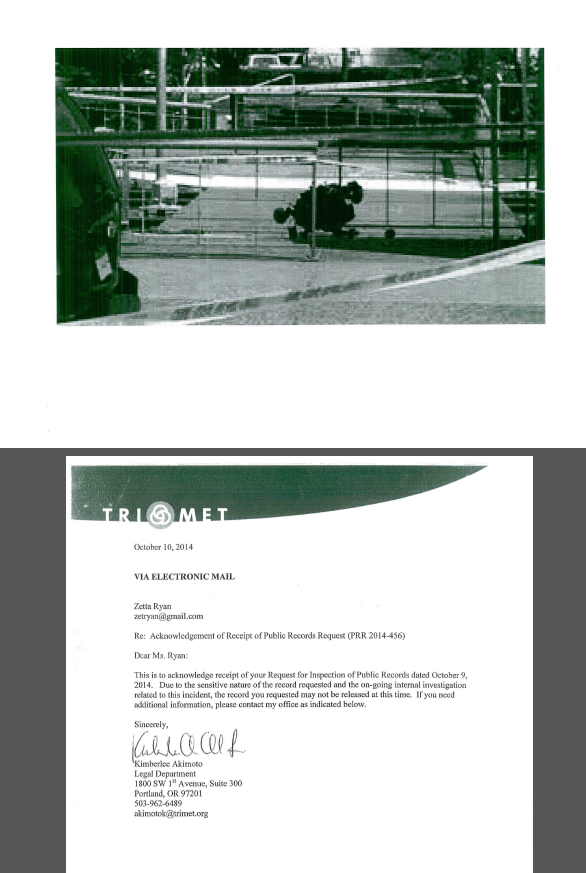 Thank you, councilmen and councilwomen, for allowing me the opportunity to address you on
the topic of Max travel safety. The Max train system serving our city and area is pretty
wonderful and is enjoyed greatly by many.

I need to discuss the terrible tragedy August 16th at the Gresham Central Max Station when
two people, one a wheel-chair bound woman, were killed by the Max train.
I was an eye-witness to this horrifying accident and was the first 911 caller.
It was a beautiful sunny Saturday morning and I was waiting on the south side of this train
station to pick-up a friend coming out to Gresham from Portland. When the train traveling cast
arrived at the station, I looked closely up and down the train cars for my friend's arrival. There
were few disembarking passengers and my friend had never made that train.


But I did see the above two passengers. I watched these two very closely before and as they
died because from first when they exited of last traincar of the Max train they drew attention. A
211 c1 wheelchair-bound woman had just made her way around them when I noticed the I st
woman in a wheelchair yelling "Let Me Go!" in a not-too-frightened-sounding voice after she
had made her turn off the train and onto the platform. The man, who had exited with her and
was walking between her wheelchair and the train, was holding on to her left arm or left
wheelchair's arm. (The controls for a wheelchair arc typically on the right side I have heard,
but am not positive in this fact)

They journeyed like this all the way approx. 90' down the platform an entire train-car length,
alongside the stopped train, as she maneuvered her wheelchair down the platform 'walkway'
and repeated "Let Me Go!" several more times. The man was acting strangely, positioned
between her wheelchair and the train, walking and then kind of lurching/skipping sideways
while he held onto the woman's left arm or the left arm of her wheelchair. From my viewpoint
I thought that he looked somewhat trapped too closely to the train by the wheelchair for much
of this time. They together looked highly unusual and did not behave the way most
disembarking passengers behave.
'
They got closer to the break between train-cars. As the warning bells of a further traffic
crossing guard across Eastman St. rang, this full grown man started 'tugging' or 'bouncing' the
wheelchair by its left armrest even closer to the train. By this time I was definitely quite
worried about the woman's safety: I became afraid and horrified for them both and was saying
"Oh No, Oh No, Oh No" out loud to myself in my car as he pulled her even closer to the train
and the space between the train cars.

The woman in the wheelchair was very close to edge of platform at this time and just as the
train started the man fell or tripped backwards into that break-between -the-train-cars. His face
had a very surprised and frightened look and he hung onto the woman's wheelchair's left arm as
he fell and the train picked up speed. This tipped her wheelchair over sideways, left toward the
train: The woman was quite heavyset and had no way to stop her change in balance. She fell in
head-first after the man and was sucked into that space after him, between the train cars by
gravity and the train's momentum. Her wheel chair was caught (sideways?) by the train and
was stopped approx. 90' later(!) by metal bars near the pedestrian crossing to use train station.

This tragic accident did not have to happen: Like many accidents it could have been prevented.
A glance in a side-view mirror would have seen their altercation and delayed departure.
I am not interested in lawsuits or blame except for whatever is necessary to prevent future Max
accidents: I believe public safety requires additional protocols for the Max train operation

My questions for the council to investigate in the matter of Max train safety arc these:
Why didn't the train operator have to procedurally look into a right side-view mirror at exiting
riders? Airplane pilots have checklists to follow before starting engines. Automobile drivers are
required to use side view mirrors for public safety. Our trains should also be as safe and as
safety conscious for all its passengers.

What Duties, if any, does Max have toward its handicapped riders and any assaults-in-progress
upon them? These people could have been anyone in disabled conditions: inebriated,
psychologically impaired or senile.

How could the train have dragged this wheelchair 90 feet down the platform until it was
blocked from continuing without the operator noticing? This could have been anything or
anyone: I shudder to imagine it a baby stroller. See attached photo of remains of chair
intercepted by safety railings by pedistrian crossing to train.

Conclusion:
One look by the train operator in a mirror down the side of the train would've shown something
unusual and dangerous was occurring with this handicapped woman and this man. This one
look could have stopped the train from moving, would have saved these two lives.
I'm hopeful that this one look at exiting passengers by the train operators may save other lives
in the future.

There is another aspect of this accident that is bothering me tremendously and that is that
Trimet's official version is that the man jumped into the lap of the woman in the wheelchair
and inadvertently drove the chair (perpendicularly) into path of danger.

I cannot understand this. This did not happen from my point of view. They proceeded entire
length or train, close but parrallel to train until they drew even closer, too close.
There are several more facts that have come to light. The man, John Paul Kelly, turned out to
have been severely mentally handicapped man of 48yrs old but happy, polite and excitable (and
strong). The woman in the wheelchair was his mother, Bertha Nellie Kelly, aged 66yrs. The
second woman in the wheelchair was possibly accompanying them on their way to a Saturday
Market. She knew that they both enjoyed the lap-sitting behavior at home. She and l were the
only ones left as 'watchers' as other travelers on South side on train had gone about their
business. As she had gone ahead, unless she turned her chair around she likely couldn't have
seen what happened to them, behind her.

Also I'm aware of the fact that witnesses' accounts often vary, but these two versions differ
wildly. I must stand by what I saw. I would very much like to see this video tape that
supposedly shows John Paul in his mother's lap because otherwise I just can't get behind that
point of view as that reality of accident. I have applied for the request to inspect the public
record being this videotape, but as you can see from attached last sheet of packet, Tri Met has
denied my request in part because of the sensitive nature.


I see replays of this accident in my mind several times a clay still. I need to find peace and truth
in relation to how it's being represented to the public by TriMet. I feel I am the only real
witness to their deaths and must represent for John Paul, Bertha about the incident and danger
of this accident. Hopefully this will help prevent any future victims of mischance to close too
Max to die.


Dear Ms. Ryan :
This is to acknowledge receipt of your Request for Inspection of Public Records dated October 9,
2014. Due to the sensitive nature of the record requested and the on-going internal investigation
related to this incident, the record you requested may not be released at this time. If you need
additional information, please contact my office as indicated below.
Sincerely,
1Ct:~L(l UL~ J_, 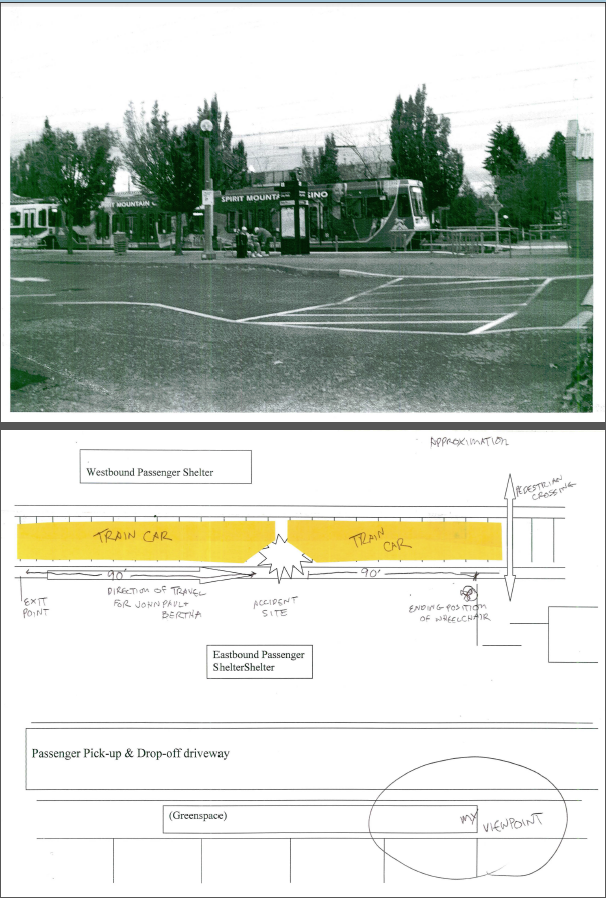 Heart felt for sure but not accurate. It is impossible to look into the side cameras and judge distance, activity and condition of people on the platform. They would be a great distance away and with that small mirror or camera there is not much you can focus on.

This would be like saying someone in a car is responsible for what is happing five cars back behind them by looking in their side mirror.

Once a train signals to move even if the operator looked back and caught the very moment they fell and could processes it fast enough to hit the breaks the train would not stop in time to have saved their life.

There is risks in this world. Dangerous and deadly risks. Being near a train or a bus is a risk we take for granted. To blame the operator for these risks comes from lack of knowledge about large trains and how they move.